All a board (groan) 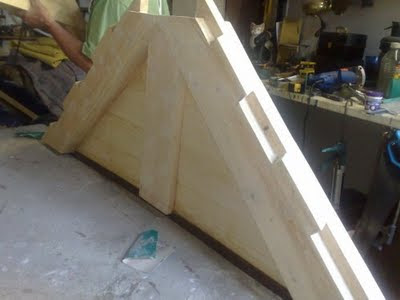 Chertsey's new deck board is finished! Well, all bar the priming, rubbing and painting. A super job; thanks Jim. Unlike the old one, this one has a hardwood strip along the bottom, and it is finished with an angle to it, to take account of the fact that in position, the deck board tilts forwards. Unfortunately, we couldn't remember exactly how much - not that we'd actually measured the angle anyway. This is also taken account of in the cutting of the slots for the side pieces - which Blossom tells me are the bits rightly referred to as cratch boards, which I like.

Jim has also completed the new false cratch, but my photo of it has come out so dreadfully that I can't show it to you. The false cratch is the A-shaped frame which is linked to the deck board by the cratch boards. The whole assembly is then the cratch.

But where does the word come from? In horse boating days, the cratch was where the horse's fodder was kept. I've seen it suggested that 'cratch' is a corruption of the French 'creche', meaning crib or manger (originally of course, like its French counterpart, a place for putting hay etc. rather than a baby). Sounds plausible, except why would a French word have been used when there was a perfectly good English one? Maybe the word was already established as the name for part of a boat in France before somehow being transferred to English. On the Harland and Wolff drawing I've got, it's shown as 'crutch'; this I suspect is the draughtsman taking an unfamiliar word and hearing or reading it as a more familiar one. Lots of things on the drawings have different labels from what they were called by boatmen.

Chertsey's deck board is 22" from top to bottom; originally they were specified as 27", but (George on Sandbach tells me) lower ones were introduced for boats working on the northwestern waterways because of the lower bridges. It's interesting that Chertsey's deck board (and false cratch) are stamped with its GU fleet number, 130, if as this suggests they're not the original ones. I wonder if they might date from as late as BW days, as they kept the same fleet numbers. I know it's been well looked after but reckon it's unlikely to be 75 years old! Ultimately though, I really have no idea.

I've gone for keeping the lower profile - it will be helpful of course having that extra bit of clearance, but my main reason is that I just prefer the look of it; to me the big boats look better proportioned like that.
Posted by Sarah at 22:00