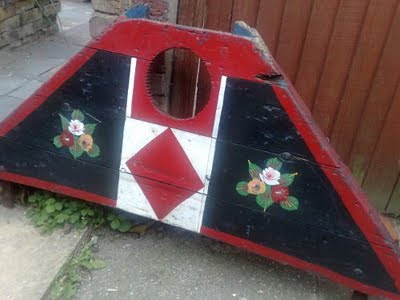 Sadly, the deckboard (which I think may be original or nearly so; it certainly has Chertsey's GU fleet number stamped on it), as well as being somewhat battered around the edges, also proves to have at least one rotten plank. The fact that it has survived this long is probably due to its having been stored off the boat in a shed for a few decades. Rather than keep using it until it falls apart completely, I've decided to have a new one made - and Jim has volunteered to make it!

So we brought it home (again, along with the false cratch) on Sunday and this morning measured it up in order to get the wood to make a new one. These things are never simple are they. It's built from planks of tongue and groove, about seven inches wide, and 7/8" thick. The width doesn't really matter, as the planks are sliced off top and bottom as it it; more, narrower ones will probably look better. But the thickness is a bit of a problem; modern standard thicknesses seem to be either too thin (20mm) or too thick (38mm). These thicknesses, as I have enjoyed learning (not today; I did already know) are not the actual thickness of the wood you buy, oh no; they are the nominal thickness of what it was before it was planed. A bit like Whitworth bolts, I suppose. So the 20mm is something less that 3/4" and the 38mm is about an inch or a little bit more. The overall thickness of the deckboard is actually formed of three pieces of wood, so using the thinner T&G but the thicker wood for the framing, overall it should come out about right.

We went to Wenban Smith in Lewes for the wood, and not only was the service excellent - very helpful and friendly - the wood is very good quality as well. 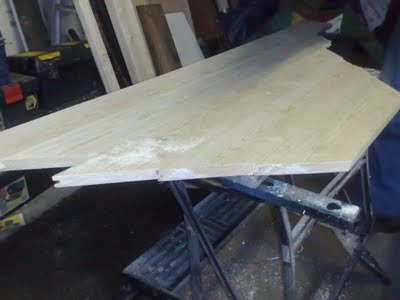 The new one won't feature the hole carefully drilled out for, presumably, the headlight.
Posted by Sarah at 19:58