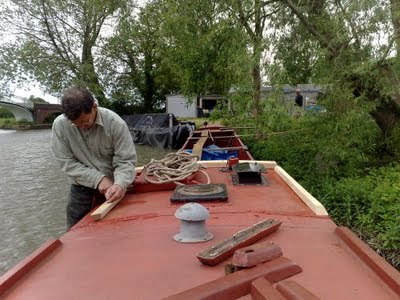 We had a short but very productive weekend in Braunston. I chronicled every stage in photographs - and then left the camera on the boat. So instead we have a grand total of the three photos which I took with my phone.

We are in Braunston to get some woodwork done. Gunnels, handrails, front cants, and back end beam, I think the total will be. We arrived on Friday and set about removing the old wood from the foredeck - there were already cants in place, plus the breast piece that had bees nesting in it, and handrails which were so rotten the rain was running through them; the back end beam we removed last year as it was totally rotten, and the gunnels have always been conspicuous by their absence. Naturally we (especially Jim; que sera sera being my middle name, ha) were concerned as to what lacework, rust etc we might find beneath - the answer was none; all the steel was very sound. Hurrah! 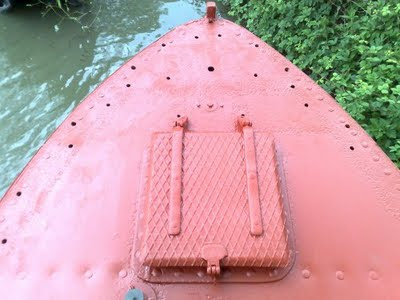 Jim had come armed to lever ('horse' in his terminology) off the wood but with the exception of the breastpiece even that proved too sound and I was afraid of damaging the steel if we were too violent. So we got the ladder and lowered it through the foredeck hatch, and Jim lowered himself down it. I wish I had that photo. He set about the nuts holding the wood on without much hope, but found them to have been greased on installation forty-odd years ago, and with the exception of one, whose bolt was turning in a rotten bit of wood, they all undid. Better still, one of the cants is made of some sort of hardwood that was still in excellent condition, and with a little reshaping, will be reused.

On Saturday morning we set about swapping places with Betelgeuse, and I did a lovely bit of winding round the turn, which no one saw, and then cocked up getting onto the mooring, which everyone saw. Thenceforth the weekend was one of quiet industry in which thinbgs happened without you actually seeing anything move. By lunchtime on Sunday, when rain stopped play, the new block for the deck lid hinges was not only made but in place; the back end beam was made and temporarily bolted down to try to get it into the habit of bending before being taken off again for a bit of a helping hand; 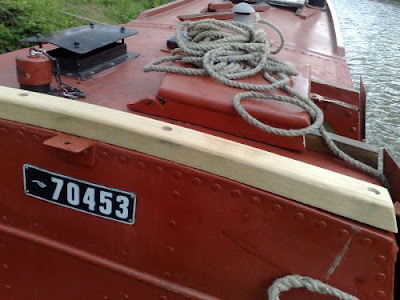 the handrails, complete with a drip at last over the starboard engine room doors, were made, and on Jims part, all the old wood was removed and the steel beneath cleaned and painted.

Today the oak for the gunnels is being ordered; the handrails might have been fitted in our absence if the rain eased off, and a nice piece being selected for the new cant. We return a week on Thursday to continue the job. Very very impressed so far.
Posted by Sarah at 21:34