I have long been adversely impressed, if that's a concept that makes any sense, by plumbing. Not so much working out where the pipework goes, which it goes without saying causes me great confusion, but the fact that whenever you want to join one piece of pipe to another, it is impossible to do so simply. If the EU had invented a system like this, we would all (yes, even me) be up in arms, but because it's just the way it's developed, we accept it without a murmur. Is it the inevitable outcome of an evolutionary process though? (Surely that gets rid of redundancies and inefficiencies...). Because another thing I have noticed about plumbing, is that Messrs. Marley etc seem to have discovered an ability to charge astronomical sums for small pieces of plastic unrivalled in any other field.

So, whenever you want to connect, say, a tank to a tap, the unwritten rule states that you will need a minimum of six intermediary pieces (most of which are not sold separately so you will have to buy at least four bits you don't need). I wanted to connect a tap to a tank - twice, in fact. One is already done, and involved numerous fittings and very short lengths of copper pipe because of course the one thing you cannot buy is a simple adaptor to take pipework from one size to another. Oh no. It's as if no one in the history of the world has ever wanted to do that before.

To put this in context... you may recall that I acquired two rather splendid, nearly new 100 gallon domestic water tanks for Chertsey. Seemed a bit of a waste just to use them for ballast, so I decided they could be freshwater tanks. A sort of mobile water point. Nothing sophisticated like a pump or anything, just a tap at the bottom of each tank to fill a can or bucket or kettle. And it's fitting these taps to the existing outlets that has proved to be a surreal nightmare. Today we're bringing the second tank up to Chertsey, and building a proper wooden frame to support them. So we need to fit the tap to the second tank - which either has a different fitting or the plumbers merchants have offered us a different solution, still involving numerous bits, including soldering them this time, at a cost of forty quid, not including the tap. 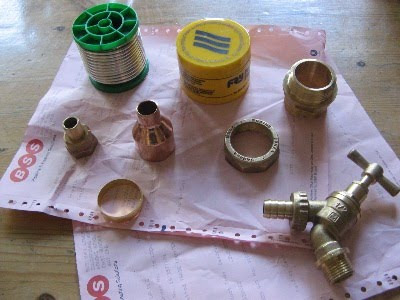 Why is there no national campaign, nay parliamentary petition, against this Plumbing Madness?
Posted by Sarah at 17:04