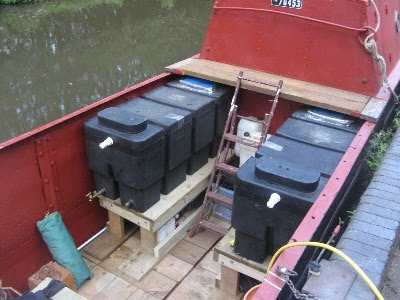 Thanks in particular to Andrew for your comment yesterday. The answer is that I have no idea, and yes, it was to fit the fitting already on the tank. Which it now turns out, leaks anyway. But more of that later. You should have seen the palaver required on the other tank (although at least that doesn't leak). Anyway, they're in, raised up on stout wooden frames so that we can get a bucket or can underneath. So we now have a 200 gallon fresh water capacity, and pretty much nothing to do with it - no toilet, no shower, no water pump, no taps. We are indeed a travelling water point, and happy to fill anyone's can for them! Listing a bit at present, as we filled the first tank before realising that the second one leaked. And as always listing to starboard so that I'll be tilting the wrong way in bed. Why is it never the other way? When the gunnels are done we will probably have boards across the back end covering the tanks - neat and hopefully convenient.

Yesterday when we arrived, Blossom was here and we had an enormously long and entertaining chat about his youthful escapades. Hence we didn't start work on the tanks until today.... Have decided to leave the sterngear be pro tem as it hasn't leaked a drop, but we will do it before we go anywhere. Especially as the next place we go might be out onto the Trent (again, so soon?) to give the engine a 'good thrashing' (technical term) in the hope that it might cure its oily exhaust.
Posted by Sarah at 21:25