It is true that the restoration of a historic boat is never finished - only that perhaps, at some point, it becomes maintenance. Chertsey's front cants and breastpiece were replaced in 2011 (I think!); or rather one cant was; the other, which appeared to be made of mahogany, was still sound so we cleaned it up and put it back. The new pieces were made of oak, and looked splendid in their shiny blue paint. As early as last autumn however, I noticed that the paint on the new cant was cracking, and knew that this would need attention quickly before water got trapped underneath the paint. 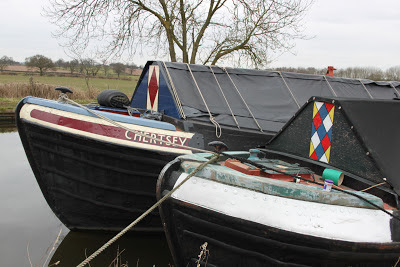 Jim has set to now and started work on it. He'd never been happy with the primer originally used - oak is a difficult wood to get paint to adhere to - so rubbed it back to the bare wood and primed it again (if I could remember the primer he used I would tell you, but it will no doubt come up later). Then this week he undercoated it, and it snowed. Hopefully it will be blue again by the time we set off to the Port, but it is very much in the hands of the weather. 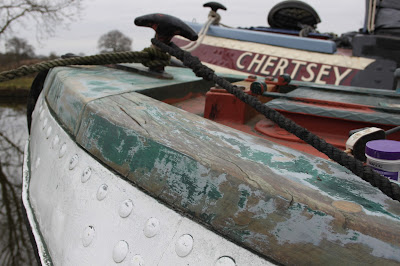 While he was about it, he also rubbed down Bakewell's front cants. These seem to be in good condition, with no rot - but aren't oak or hardwood. If I had to guess I'd say they looked most like elm. There are some wide cracks (especially on the other side, not in the photo) that might need filling before they're painted. The idea is to do bits of Bakewell as we go along, in tandem with Chertsey. The colour scheme will be the same but possibly not the actual livery.  In practice of course, Jim is doing nearly all the work while I sit at my desk in the warm and only turn up for the fun parts. The big job on Bakewell is still the back cabin, of course, which was meant to be done last summer but there was never a long enough dry period.
Posted by Sarah at 12:27