No, not the reservoirs (this time) although I do feel for all those people trapped on the Fens by the de facto closure of the Northampton Arm (but look on the bright side, you won't have to do the Nene this year, and you can go and visit Cambridge before the Cam Commissioners put their prices up...). As for anyone who was hoping to visit the Middle Level... it'll wait, I promise you. 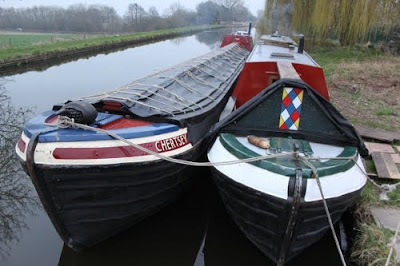 Anyway, my low level refers to Chertsey's cloths, now rearranged sans deckboard, initially because of a low bridge en route to Droitwich (but now we have finally looked at the map we have worked out that we won't be going that way), but also hopefully to offer less for the wind to get hold of. I kind of like to see a Big Woolwich or a Royalty clothed up like this anyway; it has a certain something about it. There is still nearly 6' headroom underneath, in the middle. Also, illogically, it feels much easier walking along the top planks - illogical because they're only about a foot lower at the back (and less than two feet at the front), and, without the uprights, the planks are more bouncy.

Lots of people when clothing up like this fold the topcloths in half. That won't work for Chertsey though; firstly we have a little more height than the milk crate minimum, and second, the side cloths are relatively short (I can't remember how or why I decided on that now), so half a topcloth won't cover the gap, while a whole one is too big. So we have had to tuck one edge under (or both, until I thought of doing just one), and have put a pleat, which you can just see, in the middle of the shaped front one..
Posted by Sarah at 18:55