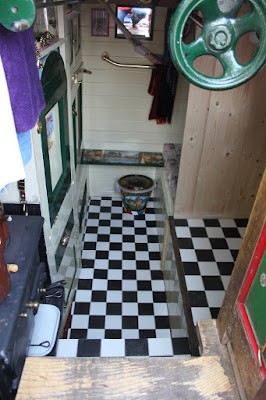 I decided that a piece of vinyl would be just the thing to make the sidebed look clean and tidy. (It's got tatty old graining, which i don't want to look at because it's tatty, grubby and dingy, but I don't want to paint over because it's old). Then I thought, a bit would be nice on the step too. And if the join could be covered up with vinyl, we could let a piece into the footboard, so my toes wouldn't be hanging over the edge. If there was any spare, it could go on the floor where Willow's food and litter tray will be when we're on the move (of which more anon). And another bit on the dark floow would brighten things up a bit. Any really spare bits could go in the bottom of the cupboards.

Now, of course the holy grail of back cabin lino is one with a small, diagonal black and white check. No chance. Everything is at least 6" squares, sometimes eight, and always on the straight. I did once get three small (about 5' x 3') pieces with a six inch diagonal check, albeit slightly marbled, at Barnsley market. I rolled them up, tied them with some scarves, and bought them home on the train. Two of them went into Warrior's back cabin, and the third is at the house. I toyed with going back to get it for about a second, but it wouldn't have been worth it.

We shopped around, all the big chains; no small squares, and up to ten days to have it delivered to the shop. Then I said, let's just try that little place in Penkridge - it's called Penkridge Flooring and is (the young man told me) an offshoot of Stafford Carpets. And lo, there was a nice black and white 4" check, and what's more, they could get in in the next day, so I went mad and ordered a 2 x 2 metre piece. Of which I have probably used just over half, so far, and am ready for a very surreal game of chess. But it really does look much brighter and by covering all the little cracks will make it easier to keep clean, and will keep dust and splashes out of the side bed too. It is - very unobtrusively - slit in places to allow it to be rolled back for access to vital bits, or removed in sections.

The rather extreme version of the modesty flap will be explained later.
Posted by Sarah at 18:17