Primed and ready to go If you had been passing Stretton today you might have wondered what all the shouting and swearing and weeping and wailing was about... Nothing to worry about, ladies and gents, just me doing some painting - an activity I find uncommonly stressful. Having found some rather good black paint - Blackfriars C90, for metal and wood, heat resistant to 150 degrees C, and nice and shiny - I decided to smarten up the area around the stove. This had been painted in matt heatproof paint, but that was two years ago now and since then we've added some more fireboard, which was rather unsuccessfully painted cream (you can see it in the photo at the top of yesterday's post). Above that were Chertsey's plaques, but I have decided on a new position for them. All of it was very discoloured, mostly from soot from the Beatrice stove last year, and I decided that a coat of nice shiny black on the whole lot would look smarter, and provide a good background for any bits of brass that end up there. Well, it's nice enough paint to work with, and covers well, but what an awkward area to work in, especially with that edge to keep neat. And then a few hours later, just as it was nice and sticky, I went and leant the cuff of my cardigan against the edge, leaving a patch all rough and fluffy (although Jim successfully got the black mark out of the woolie, so not quite all was lost. Golly, I did shout though). All in all, although not perfect, it has probably been worth the agony. I think it does look better already. 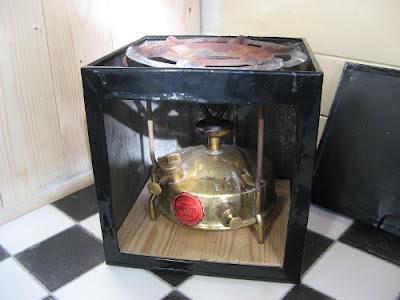 The other thing I have used that paint for is to smarten up one of the tins that I bought from CanalWorld's David Schweizer for putting a Primus stove in. The Primus (pressurised vaporised paraffin) has many advantages over the Beatrice (paraffin via a big wick) - it is far more economical, more efficient and a lot less messy in terms of producing soot. On the downside, however, there is an arcane ritual to be performed to light it, and the slightest draught spoils the magic and leaves me (once again) swearing, sobbing and dying for a cup of tea. The tin, which is made from a bulk Peak Freans biscuit tin (they'd have been scooped out and sold by the pound in the shop) should overcome this by shielding the pre-heating meths flame from draughts. I've put a wooden base in the tin to raise the pot stand level with the top of the tin, so that the kettle can sit safely on it, whilst the lid can still fit on to keep it clean and tidy when not in use - and it fits neatly into a perfect storage spot too. 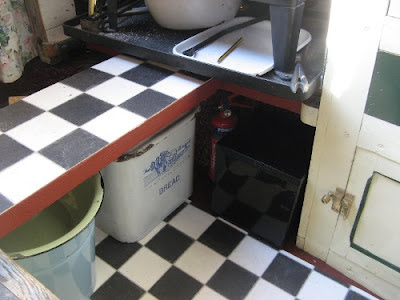 Oh yes, we're leaving for Droitwich on Sunday.
Posted by Sarah at 21:22