Should look nice on the mantelpiece 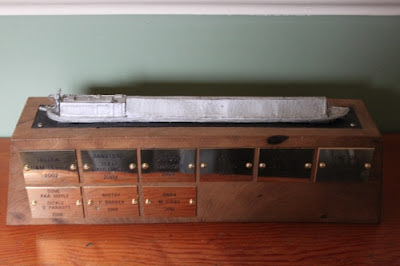 Yes, the answer was that all those boats have been recipients of the Hemelryk Award, presented each year by HNBOC to the 'most improved' iron or steel narrowboat - in practice, the best restoration. The reason I can reel off all the previous winners is because the trophy is currently sitting on Bakewell's sideboard. Not that Chertsey has won it, you understand - it wasn't even nominated (sob) - albeit largely because I didn't nominate it. No, we are merely looking after it temporarily while it is in transit between last year's winner, Swan, who handed it over at the Walton launch on Saturday, and this year's... You didn't think I was going to give it away did you? No, you'll have to come along to the AGM on March 3rd to find that out. 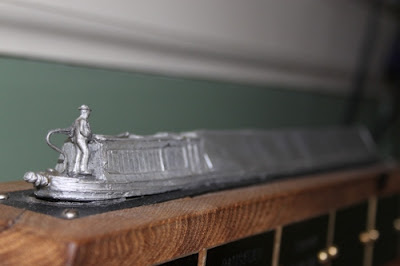 To be honest, this is rather nicer than the Keay award, which is a rather battered rosebowl which has seen better days, but then wooden boat restorers are so unworldly they probably don't notice.
Posted by Sarah at 20:24