The Beast of Bakewell 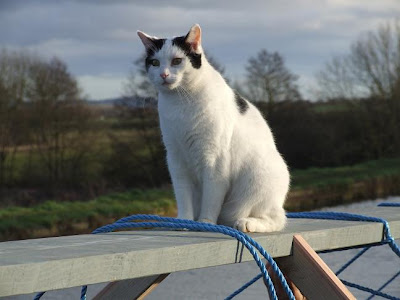 Photo: Pete Boyce
He so easily could have been the Beast of Bodmin, but I think we're all a lot happier with the way things turned out, buttywise.

Boat - or rather, canalside - life is certainly bringing out other sides of Willow's character. In the absence of the other cats, he's become a lot more affectionate, on the plus side. But on the minus side, since leaving his previous urban environment, he has become an enthusiastic devotee of country sports, otherwise known as chasing and killing defenceless mammals for fun. Only I don't suppose even the Quorn Hunt used to drag half dead foxes in and release them under the bed.

We were planning to get Willow a catflap, but this idea has been put on hold indefinitely pending the requirement that he be thoroughly searched before being readmitted to the boat. This morning Jim slipped up, whilst struggling out of the door with the porta-potti, realising too late that Willow had slipped past him, ominously purposeful, and even more ominously, silently (on account of having his mouth full of vole). This one was wholly dead, but parts of it still had to be removed from under the bed. The idea of him coming and going at will during the hunting season of the night, and delivering his prizes onto the pillow, hardly bears thinking about.
Posted by Sarah at 19:03