We took Warrior to the IWA National Festival in St Ives in 2007. I think it was only our second ever National - the first being the one at Beale Park in 2003 that kicked the whole thing off. I don't have to hand any photos of Warrior there on the Great Ouse, but I am fond of this one of her shining her searchlight into the trees. 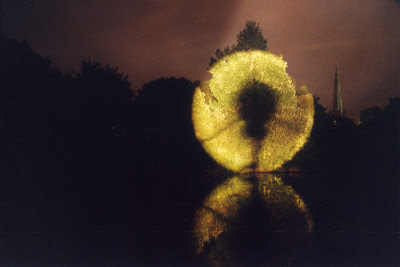 Other high spots of this trip included taking Warrior back to her birthplace at Bill Fen, and having a splendid time in Cambridge, where we were invited to tie up to another tug at Jesus Lock just as we'd resigned ourselves to giving up and turning back - and whose owner then took us on an amazing Cambridge pub crawl. 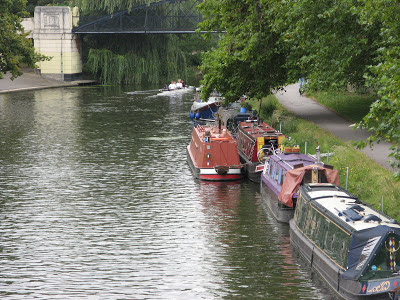 Craig on Pyxis, you are one of those boaters who will never be forgotten! We were to return to Cambridge in 2010, by which time Warrior was moored at Bill Fen.

Apparently it was at St Ives that I first learned to splice - and I say 'first' advisedly, as I have forgotten and learned many more times since.

The most memorable thing, though, was how muddy it was. The Wergies were revelling (if not quite rolling) in it whilst gleefully telling everyone that it wasn't 'as bad as Wakefield' thus demonstrating that not only were they tough, they had alse been doing this for more than fifteen years.

I volunteered to hand out programmes at the entrance, and fielded a lot of complaints about said mud. I only did it to get the T-shirt - which I still have, of course. Then they lowered the river level to try to do something about it, so the boat tipped over - we had a nice inside mooring so that people could look at the newly flash engine, but because Warrior has hatches only on one side, ended up having to face the wrong way.

St Ives was also the first time I saw Fulbourne, which was tied up behind us, and became - with its multiply varnished and aged austerity livery - my ideal of what a GU boat should look like.