The apex of convenience

Since we've been keeping Chertsey fully clothed up, and camping beneath in ever increasing comfort, we have had to deal with the top plank extending across the large boarded back end deck area to be supported on the beam on the cabin top - as can be seen in this picture taken at Bugsworth last summer. 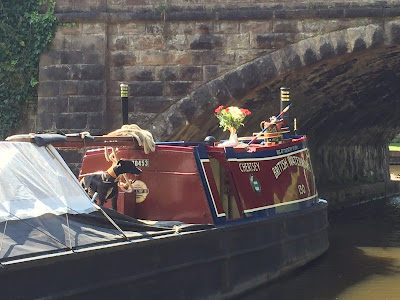 This makes it a bit awkward climbing the steps onto the deck, crossing from side to side and generally using and making the most of this very useful space. So, a long term plan has been to make a frame which will support a shortened top plank, finishing cleat of the steps and the edge of the boarding. It also needs to be able to pick up the remaining section of the top plank for when we cloth the whole boat up for the winter. We decided to make a frame on the same sort of basis as a false cratch. It's not attached in any way, other than gravity and string, but is sufficiently stable and robust in itself to distribute the weight and strain safely. It's important that we can still be confident in walking along the top plank when we need to. 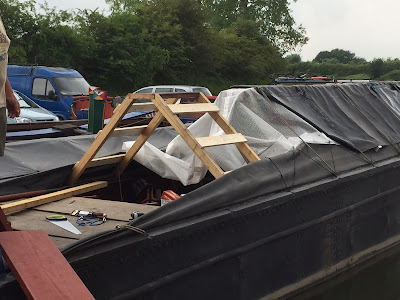 The top section of the frame is made from a bit of historic Chertsey - a section of top plank that came with the boat, and so is almost certainly at least forty years old, and very likely older. It's the foremost plank, from the deckboard to the mast. We've been using it as a gangplank, but it's a bit short, and increasingly rotten at one end, so repurposing part of it in this way seemed a good idea. Sawing off the rotten end revealed really old, solid wood. Within the piece that was removed there was an iron spike, which I persuaded Jim to hack out to keep as another souvenir of the boat's history. This hand made spike, hammered through the width of the plank and bent over at the end, is further evidence of the age of the plank. 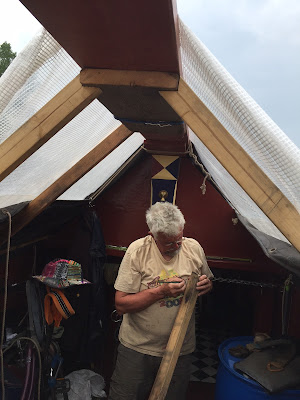 To make the frame to fit perfectly under the top plank, we lashed it in position with the top plank still in place. Jim then cut to length and fitted four 'uprights'; the slightly misleading name of the 45 degree supports that pick up the top plank from the gunnels. The whole assembly was screwed together, with boards across the sides to give it rigidity and stability. Having done that, Jim them sawed the top plank in situ, leaving a shorter piece resting on the new frame, and releasing the longer length the be used as a boarding plank (a heavy one, admittedly, but nice and wide and stable, and long, for Rocky), and when not in use, it fits neatly between the last board of the deck and the first cross plank - out of the way and a handy shelf to boot.

This year we haven't taken the black top cloths off yet. We put them on last autumn over the translucent sheeting the we put on last year, and the boat stayed completely dry inside over the winter, which was very satisfying. With it clothed tightly up to the cabin, very little rain even got in the back end, meaning that there wasn't any damp under the floor. We know, however, that there are a few leaks in the translucent sheet, mostly where it has rubbed on the top plank under the strings but also in a couple of places where it's been attacked by vicious trees, so if we do take the heavy duty black cloths off, we'll have to replace them with the tippet - the narrow strip that reinforces the cloths over the top planks. But we might leave the top cloths on - we've folded them back where they join to make windows, and that seems to let enough light into the boat, at least for summer use. And as we'll be disporting ourselves at Woking (if all goes to plan) in the guise of a historic boat, then we can just flap them back again and look properly old again.
Posted by Sarah at 21:08