High on the hog

The first retrospectively illustrated post is inspired by the Herbies' perturbation at a £22 pub sirloin steak. No matter how good it is, £22 is a lot to pay in a pub. Even the unsurpassable (these last few years) Nelson only charges around £13, from memory.

We are now moored, permanently, round the back of the Samuel Barlow pub, just yards from the entrance. Fatal.

A fellow moorer commented on the blog (hello!) that it's not really a pub pub, and I see his point in that it's a big square room with tables set out for eating, with no fire, booths or inglenooks - and no jukebox or fruit machines either. But in every other respect it fits the bill. It has its regulars; it has three (if unadventurous) cask ales (with occasional festival laying on of many more straight from the barrel) and the full range of everything else you'd expect behind the bar; it has quiet background music, friendly and efficient but relatively unobtrusive service, and a fabulous menu at very reasonable prices (which sadly you can't see on the photo). 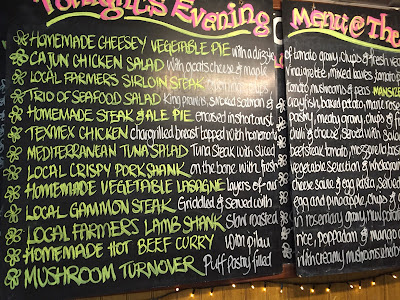 The sirloin steak comes in two sizes - the 'regular', which I reckoned must have been around 10oz minimum, was £10.95, and was a beautiful big thick chunk of meat, very nicely cooked too, with excellent onion rings and chips and the other bits you'd expect. The oprional peppercorn sauce came in such a copious quantity that both Jim and I were able to avail ourselves of a pound's worth, with some to spare. The 'man size' steah at £16.95 was noticeably bigger, but perhaps not such good value. We also, over the week, checked out the pork shank (fantastic crackling), the Tex-Mex chicken, and the steak pie (maybe the least impressive but still a cut above most pub offerings and at £8.95 good value). Nicely cooked veg with it. Thursday night is curry night, for which the Halfies joined us, and while it was definitely an anglo-curry, you couldn't fault it for under six quid. You'll see that there are three decent, not boring, veggie options, and two fishy ones on the menu too - and there's a different menu at lunchtimes, and I think they do Sunday roasts. I really have put on six pounds since I left Sheffield last week, and I'll bet most of that was between Tuesday and Friday.