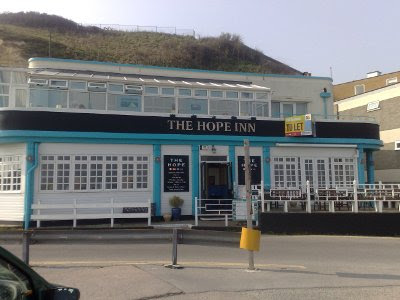 Last night saw the Canal World Southern Boaters in Exile banter, and if the Hope wasn't exactly full, it was a lot fuller than it would have been without us. Bantering boaters from across the south east descended upon Newhaven - including, but not limited to (unless my memory is far better than I think it is): Jelunga (Keith) and Judi; rjasmith (Richard) and Nessa; Bullfrog (David) and Ann, Ange and DaveL with Graham and Daphne; Alan Fincher and Catrin (Cath); Daftmare (Jo) and Kevin, and of course Paddington Bear (Jim), Chertsey, and Sebastian.

Everyone seemed to agree that the Hope was a good venue. The food was nothing out of the ordinary, but standard pub grub at a reasonable price was welcome enough, and a choice of Harveys Best or London Pride seemed to cater to most tastes. Everyone was jolly excited to see the Dieppe ferry make its stately passage past the window, seeming almost close enough to touch, and our friendly waves were accompanied by cries of 'SLOW DOWN!' Oh how we laughed.

None of my photos of the merry throng came out very well, so here is one of the exterior of the pub that I prepared earlier - it was another nice sunny day. The building has seen a number of incarnations and extensions. Old photos on display inside show it in the nineteenth century as a standard bay fronted Victorian pub; in (presumably) the thirties it was extended with an ambitious moderne style exteripr, which in turn all but disappeared beneath a further conservatory style extension in (at a guess) the seventies. It's now to let, as the landlady (who did us proud) wants to retire. With the closure of the West Beach on its doorstep, it's hard to believe there's much hope for the future of the Hope.
Posted by Sarah at 21:06