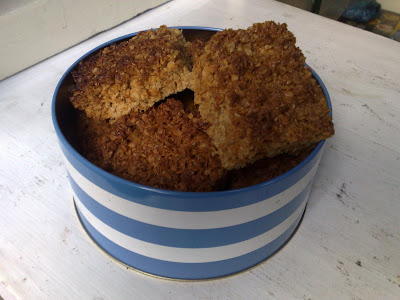 Amy Duck has her off grid baking challenge (seems to involve a lot of cup cakes, yum); I have now set about the Chertsey Back Cabin Baking Challenge.

I have equipped myself by purchasing an oven thermometer, which tells me that the Epping's oven will comfortably reach a temperature of 150c without too much effort or excessive heat in the cabin; getting it hotter would be more of a challenge I think.

I started out with something not too ambitious, but a favourite of mine: flapjack.

It took a bit longer to cook than it does at home, and thus came out a bit drier and crispier. This was exacerbated by the fact that, doing it from memory, I think I put in rather less syrup than the recipe required. Also, it didn't seem worth buying ginger specially, although that's what makes this recipe a bit out of the ordinary. It's from Glyn Christian's British Cooking at its Best, published by Sainsbury's in the early 80s. Ahem. Which has gone missing from its shelf in the kitchen. When I track it down, you shall have the recipe. But I'd better not risk giving it from memory... 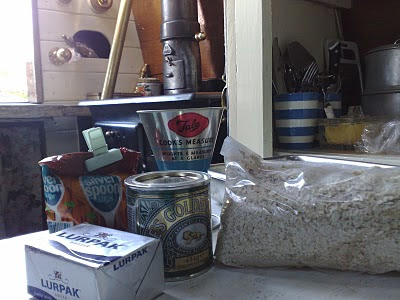 I don't have scales on the boat, so I used my vintage Tala measure. On my last visit to Wilkinsons, I was delighted to see that these are still available (although I don't think the new design's so nice). I didn't think to look to see whether they'd updated the things you might want to measure - cous cous, perhaps, or polenta, instead of sago?
Posted by Sarah at 18:48