Up with the alarm at six again today, ready to make the fire up... to discover that unlike the previous night, it had gone out. Oh bugger. So I picked out the biggest lumps of unburnt coal, emptied the ash and set about lighting it afresh. No rag, so some kitchen paper , followed by sticks, doused in a generous measure from the mysterious can of flammable substances kept for the purpose - usually diesel, oil, and/or paraffin*, but in this case a healthy proportion of white spirit from the summer's little painting jobs, so, after throwing in a match, with a very satisfying woomph, off it went, and back in with the coal. On with the kettle and back into bed with me until 45 minutes later I could hear it boiling.

Next, get up, get dressed, call Jim; put the porridge on and make some tea. Even I am eating porridge now; I have always liked the idea in principle but have never really managed to get it down in practice, but when boating, all things are possible, and two days in a row now have got off to a healthy start, albeit augmented with copious quantities of brown sugar.

And so we were ready to leave at eight, and off we went again up the Staffs and Worcs. It was only actually once we were on the Shroppie, some time later, that we fully came to appreciate that it's not just bad luck; the S&W is a horrid canal; bendy, shallow and with vicious bridges. In the wind, of course, it's horrider still. We played stuck in the mud a couple of times, and stuck on some rocks or something once, I think, but not seriously; i.e. not requiring external assistance to be extricated, just much pushing, pulling, grunting and swearing, and in one very effective (though I hasten to assure you, very isolated, geographically speaking, case) howling in despair. Well, it worked. (As an aside, I wondered at the time, why is shouting and swearing considered a perfectly sane and acceptable response to a trying situation, while spontaneous howling is liable to get you marked down as a raving lunatic?)

Anyway, at a quarter to one we made the turn into Autherley (that made it sound easy, didn't it) and then we were on the lovely straight, mostly deep and very often wide Shroppie, where I actually got some speed up for the first time - but NOT while passing that hippy boat that floated free just as we passed, having apparently not been tied up at all, or at best to one (remaining) pin in soft mud. I was sure it was completely adrift, and said, should we stop in the bridgehole (all other moving boats had been left behind at Autherley) and go back and try to catch it, but Jim said it was still tied at the back. Then as it started following us, it was obvious that this wasn't the case, so being a good citizen, I was all set to tied up and walk back, when we saw someone emerge from its companion hippy boat and take the matter in hand. And I just know they'll blame me, sigh, even though nary another boat moved at all as we passed.

But that was quickly forgotten as soon we were passing the familiar landscape of Brewood, and then in the distance was the aqueduct, with a welcoming party of swans (possibly bouncers, actually), and drawn like eels to the Sargasso Sea, we were back at Stretton Wharf again, this time as Chertsey's home and not its hospital. It was a good feeling. 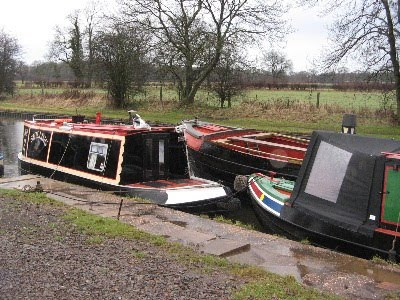 We tied temporarily next to Shilling (and another, longer boat as well), and had a cup of tea. The Volvo we'd left there six weeks previously (and at Kings Bromley for nine months before that) started first turn of the key, and after a final tidy up, we headed for home. Mission accomplished - and only seven weeks behind schedule.