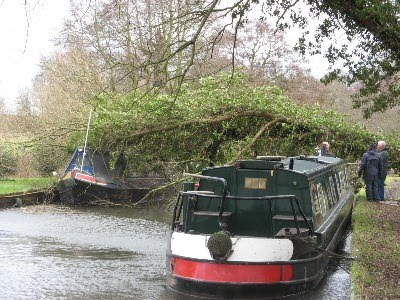 Good as our word, we were up early and off as soon as it was light - about quarter to eight. For three hours or so we had the canal to ourselves, then suddenly there were boats everywhere. Following us, and very kindly closing the top gates for me, was Mollie, whose crew had apparently been following the blog to decide when to make a break from Great Haywood Marina! All we going well, despite a bit of a breeze, until we got to Penkridge, where we started to hear rumours of a fallen tree, blocking the canal. With no idea where this was, we kept plugging on until we were waved down by Festina Lente, and there it was - an ivy covered arch low across the cut. It had landed, on the far side, on top of a boat, but didn't appear to have done any damage. After some effort, owing to the wind, we got Chertsey into the towpath and tied up.

A couple of boats behind, there was a man with a chainsaw... he set to, removing branches from below the arch, amid some fears that this might increase the weight on the boat opposite, or have some other unforeseen consequences, but he seemed to make a good job of it. He and his partner were able to get through, and the rest of us were preparing to - when two BW chaps arrived. We had just untied Chertsey at this point, and so went through the exact same rigmarole - pulling the front in with the long rope - of tying up again. The BW guys, armed with chainsaw and Tirfor (sp?) made pretty short work of it and we were all impressed by their efficiency. 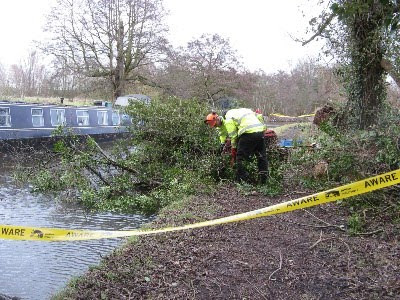 So it was only an hour or so before we were on our way again, and we were hopeful of getting to Gailey tonight as planned. It wasn't to be however; Rodbaston Lock was unbelievably slow (thanks Festina Lente for leaving it empty for us), and we could scarcely get out into the wind; we managed one more and admitted defeat when we couldn't get off the bank after coming out of Boggs Lock; the wind had certainly got up and the light was going. Nice to know that our ten hour day used all the hours of daylight. So another early start tomorrow; 14 miles and just four locks to go, and hopefully the wind will blow itself out overnight.
Posted by Sarah at 18:26