Now that's what I call an icebreaker exercise 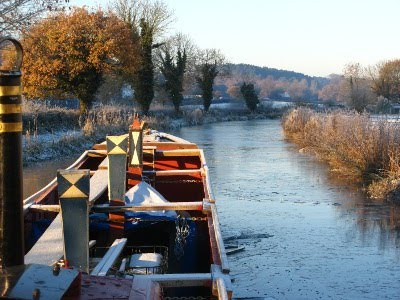 Last Thursday, I had to go to Stratford (East London) to teach a class- this will be a regular weekly thing from now on. For those of you unfamiliar with the tube, my apologies now for something slightly esoteric. My habit had always been to get the Victoria Line from Euston, five minutes from my office, and change at Oxford Circus for the Central Line to Stratford. Yes, in some ways this was an unnecessary journey (and as my colleague Ben pointed out last week, in the wrong direction) but it had one inestimable advantage - I couldn't get lost. But no, Ben said, it's easy, you should walk to Holborn and get the Central Line from there, it's only ten minutes. Well, I beg to differ, it's nearer fifteen but not wanting to be a wimp I took his advice and last Thursday I got to Holborn to be greeted with the information that Central Line trains weren't stopping there, on account of a person under a train (yes, that really is what they say) at Tottenham Court Road. So I spent another fifteen minutes walking back to Euston, knowing already that I was going to belate for my first class of the year, and resumed my normal route. Because of the earlier delays the Central Line train was packed; OK, that's par for the course on the rush hour tube. But when we finally arrived at Stratford it was to be met by policement directing us to the furthest exit - due to covercrowding - entailing a long walk through packed tunnels. I'm not claustrophobic, but I couldn't help but see myself suffocated under a heap of rampaging panicking people... It didn't help that Stratford is just two stops after Bethnal Green.

I survived, of course, and I kept telling myself, this time tomorrow you'll be on the boat. And here I am. I was thinking of this as I walked along the crisply snowy towpath earlier, just before it got dark, and thinking how much happier I am here than there. Here being Great Hayward. And so to the story of today's exploits. 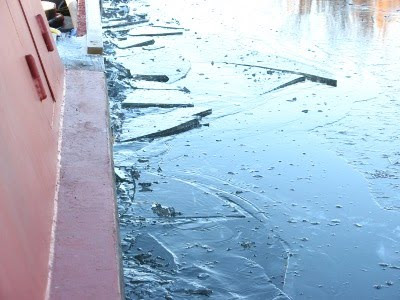 So much for the early start. Having gone to bed at eight thirty - yes, half past eight - and woken to tend the stove only at eleven and two, I still managed to sleep until quarter to eight this morning and wake up to the stove nearly - but not quite, phew! - out. We left at quarter past nine. We were breaking ice in earnest this time; no one else had passed through in either direction and it wasn't thin either. Jim reckoned an inch; I more modestly went for around three quarters. It was interesting, and rewarding - a new challenge requiring a different style of boating. Bends could take two or three attempts as I tried to break a big enough space to turn into. The locks though were not as bad as we feared; it was possible to crush the ice behind the gates. Mind you, we only managed two of them. At Haywood Lock we at last met someone coming the other way. Hooray! Only they had come from Stone, not the Staffs and Worcs where we were heading, so our joyousness was short lived. 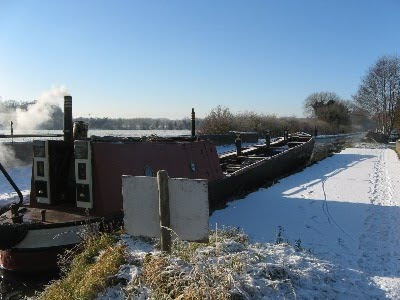 I didn't count how many attempts it took to get round Great Haywood Junction, but I got there in the end. This however was a different kettle of fish, as we discovered very quickly. It's still shallow, and we really couldn't get the purchase to power through the ice, which itself seemed to be thicker here - over an inch even to my eyes. After a couple of hundred yards we gave up, and reversed back to the narrows for lunch, while Jim went off to scout out a stopping place. He found one, just - dangerously only just but I doubt there'll be many more big boats coming through - beyond bridge 74, so I backed all the way out again and turned back round. Handy for the shops and the rubbish point, if we were staying, but we've decided - barring an unexpected overnight thaw - to head for home tomorrow, and make another attempt next week, if possible, or even later.

So a disappointing end but a wonderful adventure. The weather has been beautiful, the scenery stunning. Everything is crisp and white, the snow powdery. The icebreaking was a splendid challenge which I really enjoyed meeting. Wouldn't have missed it for the world. And given the chance, I wouldn't swap it for London life either, never.
Posted by Sarah at 18:44