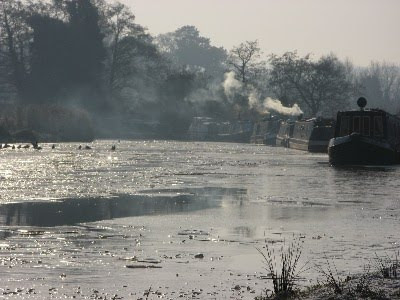 Was, without a shadow of a doubt, the journey home today. All the time I was on the boat I didn't feel the cold at all; wrapped up and with the stove going constantly, the biggest surprise was that the cold just wasn't an issue. Instead it was something to be marvelled at and enjoyed. But coming home.... I've never really noticed a car's heating system before. Handy for defrosting or demisting the windscreen, but hardly used otherwise. What I never realised was that even when you're not actively using it, that heater is taking the chill off the air. We discovered last week that Tufty's heater isn't working, but only really felt the full implications today - feeezing air constantly circulating around our feet and legs and the whole of the car, despite my best offorts to staunch it with a blanket. Even though I kept all my boating layers on, including two pairs of socks and my very excellent new boots, by the time we got home my feet were frozen, and the rest of me well chilled. None of that happened while we were actually boating. 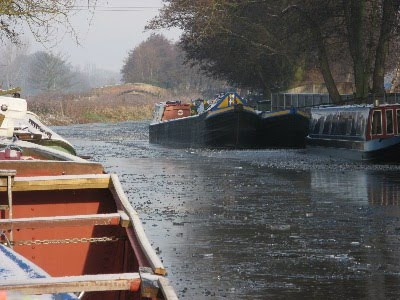 I've interpolated a few photos from this morning and I'll upload a selection tomorrow (or sometime soonish). It was another lovely bright crisp morning, and I even suspected that the canal was starting to thaw a bit - but not enough to take a chance on. So I rang up a taxi to take Jim back to Kings Bromley, where he collected the car and dropped off the keys, and perhaps said a small final farewell. Meanwhile I took the rubbish over to the rubbish point where I met Adam of Debdale and his partner whose name I'm afraid eludes me, which was a nice surprise. Having passed us at Kings Bromley on Saturday morning, they'd got as far as Tixall Wide before becoming stuck, and they likewise were awaiting a taxi to Norbury to collect their car. I took the opportunity to show Adam over Chertsey, and when he had left to drain down Debdale's water systems (what a boon it is not having any! Talking of which, I think it is a myth that you keep the water can next to the chimney to stop it freezing. Ours still froze solid), I got chatting to Annaliese from one of the hippy boats (I hope they won't mind being called that) that we're tied up behind, and she promised to keep an eye on Chertsey until the thaw. 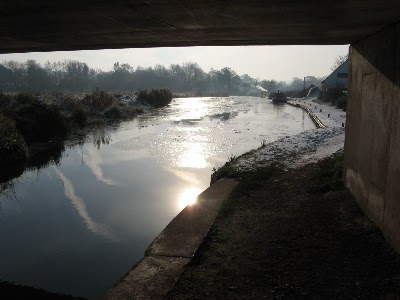