For making Chertsey130 no... whatever it says just to the right of this... in the canal website hit parade. It was a mere week ago that I switched production from nbWarrior, and hoped that the readers would follow. Well, it seems to have worked.

Chertsey passed Warrior in the chart on Tuesday afternoon, with nbWarrior at 27 and Chertsey130 at 26. This time last week, Chertsey was at 87 and Warrior somewhere in the twenties, I think. Today at midday, Chertsey was at 19 overall, and 9 in the blog charts - top ten in its first week, not bad at all. 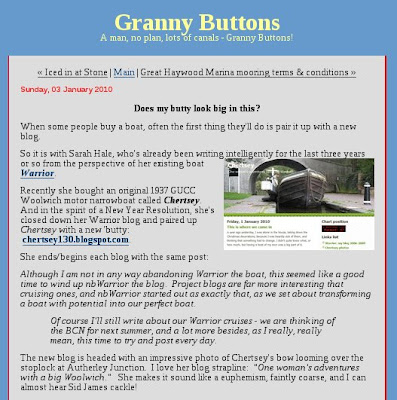 Thanks to the fellow bloggers who have updated their blogrolls to include Chertsey - especially Granny Buttons, who did a nice little feature about it, so here is a screen grab of his screen grab of me... (we could go for an infinite regress here), and Mike, who has most kindly called it 'Blog of the Year 2010' (I think there may be an implied 'so far' in there). I particularly liked Andrew's suggestion that a 'chertsey' could be an item of traditional knitwear; I'd like one of those. On the other hand, it would more likely be something crocheted...

So far also, I have managed to post every day, which is a good start to the year. When I signed the new blog up to the ranking site, I was given the user number 131. If only I'd got there just one person sooner - how serendipitous would that have been!
Posted by Sarah at 12:30