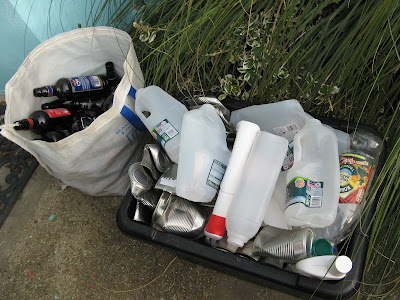 recyclable - perhaps
Here is my first rant of the new blog.

Today is recycling day in my street. Now of course like motherhood and apple pie, recycling is undoubtedly a Good Thing, isn't it? I remember how when I was on the council, when it first developed its recycling policy, how pleased we were with ourselves, providing a lead in saving the world.

So OK, recycling is a good thing, insofar as it's better than piling the stuff in landfill, or arguably - hot local topic this - incinerating it.

But frankly, it's not bloody good enough.

The government sets targets for recycling which local authorities have to meet, in some cases (although as far as I know not ours) by bullying and browbeating local residents, while almost completely ignoring the other two R's - reduce and re-use - which should come first. It is my contention that recycling is largely a flim-flam; a half-hearted sop to saving energy, resources and waste, and that the reason it is prioritised over the reduction and re-use of packaging can only be because of the power of the packaging industry.

Take the plastic bottles in my recycling bin. Some of them are from milk. We used to have milk delivered in reusable glass bottles. It cost a fortune but it was convenient and much less wasteful. However, the milk, sadly, kept getting stolen from the doorstep so we reluctantly went back to buying it from the supermarket where it comes in plastic bottles. These can be recycled, but to do so effectively requires very expensive equipment, and no small amount of energy. But why can we not have re-fillable plastic bottles (like we do with beer)? Or somewhere to get our own containers filled, which used to be the norm. Or why can we not buy it from the supermarket in returnable glass bottles the same as we can from the milkman?

What about all the shampoo and detergent bottles - not even any hygiene issues there - could easily just refill them. And indeed I could, if I was prepared to pay Body Shop prices for everyday use, and/or travel ten miles each way to the nearest shop that does Ecover refills (and that only washing up liquid, and more expensive than a new bottle). But no - there is clearly no political will to make manufacturers and retailers do this, so I have to wash the damn things up, store them for a fortnight, have them collected by one of a fleet of electric vans, to be sorted, baled, sold and shipped half way round the world to be turned into more plastic crap that nobody needs. 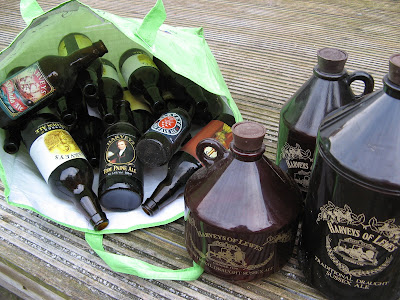 Look at the glass in the recycling bag in the top photo - quite a lot, given that we've just had Christmas. Now, in this separate bag are the Harveys bottles. When I next go into Lewes, I can take them back to the Harveys shop. There's a deposit of 8p on each bottle. They'll get washed and sterilised and used again. Now look at all the other beer bottles. Identical, but they've long since given up on returnable bottles. Who would bother, for 8p? Well, perhaps they would for 50p, or a pound. If the political will was there.

Or, if we can have doorstep collection for recycling, why not for re-using? Why not put that effort and energy into collecting, sorting and cleaning containers, and returning them to the manufacturers to be refilled? Leaving only the un-re-usable residue to be recycled.

Look at the plastic lemonade and cola bottles (in other people's boxes!). Look how much space they take up, even crushed, to store and transport. Remember when fizzy pop came in returnable glass bottles? Even I do, just about. I remember one of out teachers exhorting us to buy Corona for this very reason. (He was also a great advocate of wholefoods). Obviously we all thought he was a crank at the time, but Mr Roberts and your ilk, your time has come.

What will happen to the glass we send for recycling? Do you fondly imagine that it will be lovingly crafted into new bottles? Sadly that's very unlikely. Nearly all recycled glass is too contaminated with different types and colours to be of any use for making any but the crudest of new glass, and most of it ends up being crushed and used in roadbuilding. (But on the bright side, all that broken glass is called cullet, and isn't that a lovely word?)

Although the government tells local authorities they have to recycle, they seem to be allowed to pick and choose what they will recycle, and to do it only if there's a profit in it. I can illustrate this with an example that still makes me fume, even after I rang up the recycling officer and made her listen while I banged my head against the wall.

There are lots of different sorts of plastic. Something to do with polymers. Polystyrene can't be recycled, at least not cost-effectively, so no one collects it. It still has to be buried or burnt. Polypropylene on the other hand is highly recyclable and very desirable. Most yogurt pots are made of polystyrene. Some very trendy yogurt pots however are made of polypropylene. I was even told that they get incentives from the government to use this more recyclable material. So I carefully remove (and compost) the cardboard sleeve, and wash out the polypropylene pot, and put it in the recycling - and time after time they refuse to take it 'because it is a yogurt pot'. They don't give a damn what it's made of; if it's yogurt pot-shaped they don't want to know. So what the hell is the point of the government giving incentives to the company to use more expensive recyclable materials when no bugger will recycle them. And it's not a council decision apparently - it's the people to whom they sell the stuff. It's just easier for them to have a blanket ban on yogurt pots - get one in a bale and they won't buy it - forcing the local authority to do likewise.

So in short, if excessive, wasteful, non-reusable packaging is a problem, then why aren't the government actually doing something about it at source, instead of getting us to prettily rearrange the yogurt pots on the doorstep?
Posted by Sarah at 17:02