Obviously, if I had known what was going to happen, I would have done more boating in 2019; in the event, the only trip we made that year was to Braunston and back. And that was the last time I was out on Chertsey.

Now, we need a bit of backstory here, but I'll keep it brief. Earlier in the summer we had gone to Alvecote and among other things, tried unsuccessfully to start the engine.  Last Tuesday, Steve and Nick came over from Brinklow to have a look at it, and discovered that water has got into the cylinders. I know not how, as the cap was not only on the exhaust, but took a lot of removing when we were last there. Anyway, we are where we are, and by a substantial stroke of luck it transpired that Pete Harrison was at Alvecote that day, due to leave with Otley to collect a boat from Brinklow that same week - and I had the week off work.

So before I could talk myself out of it, I'd accepted Pete's very kind offer of a tow and set myself up for a day and a half's boating instead of tussling with the University of Sheffield's arcane promotion process. 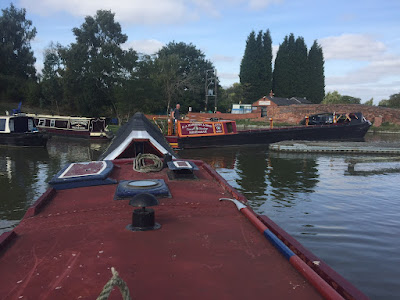 We left Alvecote just after midday on Wednesday and got half way up Atherstone (with help from Rod and Sarah) before the locks were closed; we were (of course) butted up to the gates when they reopened at eight o'clock on Thursday morning. The weather was pretty perfect and we got to Brinklow at about half past four, 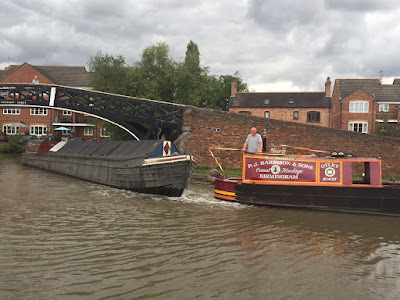 with a perfect turn (by Pete; I was on the bank taking photos and getting the lock ready) at Hawkesbury along the way.

Coincidentally, Thursday was the thirteenth anniversary of my buying Chertsey.

After three years of neglect, she looks a bit sorry for herself, but engine aside it should (touch wood, but not the rotten bits) be largely cosmetic; the paintwork and parts of the woodwork are in a bad state, but inside the cabin and the hold has stayed dry.

What the day and a half of boating has told me is that I love it and I've missed it; I'd lost sight of how much it means to me and how I've missed expressing that part of myself.

Chertsey the boating blog is back.