My day in tea

Diamond Geezer consistently drinks an average of four and a half cups ot tea a day.  I reckon that my daily consumption is around twice that, and indeed, when I emptied yesterday's teabags into the compost bin this morning, there were nine of them. My daily consumption is nearly always around the eight or nine mark, week day or weekend and, I think, working at home or in the office.

So today I'm going to attempt an incremental post, posting every cup of tea I have. It's a fairly typical day, except I've a semi-social Google meet tonight which might edge one tea out with extra beer. 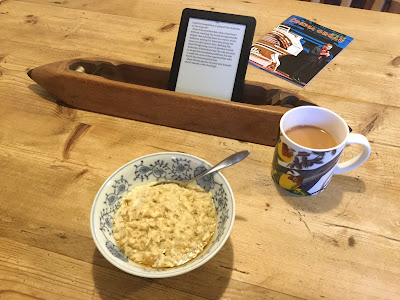 The first thing to pass my lips every morning. Come down, kettle on, feed the cat, last night's dishes away, porridge on. Sometimes the first cup of tea is finished before the porridge is cooked, other days there's still a mouthful to wash it down. Closely followed by 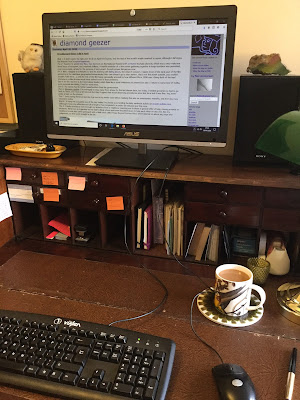 As soon as breakfast is finished, it's up to my desk for an early start to work. Except that, if I've not looked over breakfast (and breakfast is often finished before seven) I'll read DG first. There are going to be a lot of photos that look a bit like this one. 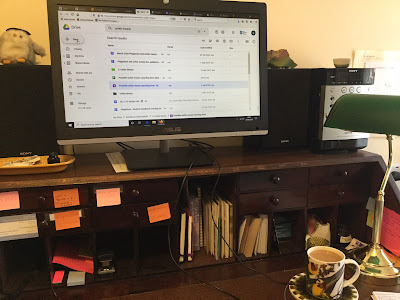 Half way through chasing up odd marks that haven't been recorded for one reason or another, I'm struck by the sudden urge for a micro-break. I take a brief stroll round the garden while the tea's brewing, then bring it back to my desk. 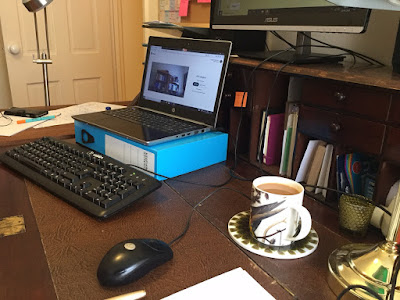 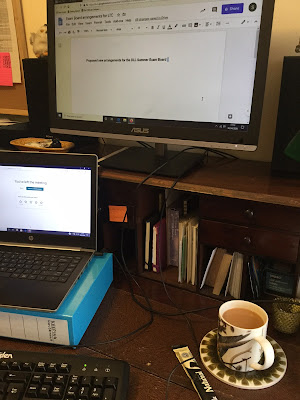 Normally I might sit in the suntrap outside the back door for my elevenses, but it's a bit dull and blowy today, so it's back to my desk between video meetings to put some work into revised exam board proposals for Learning and Teaching Committee next week. 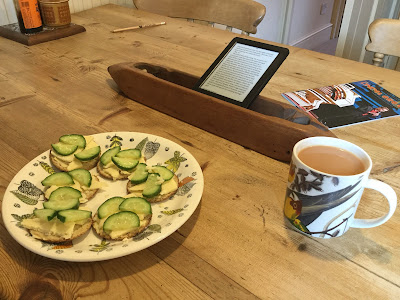 With lunch. Again, had the weather been more clement, I might have partaken of this repast on the verandah (OK, I haven't got a verandah) 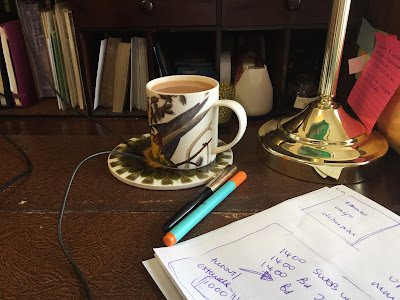 And another one to wash it down while I answer some emails. 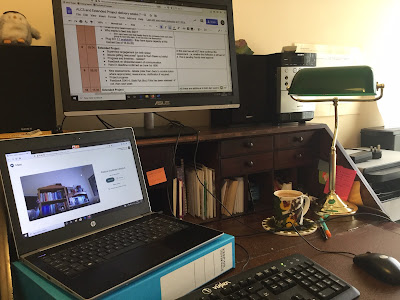 Today is heading towards being a ten+ mug day, as I settle down for a weekly group tutorial with my Politics students (hope they turn up!) 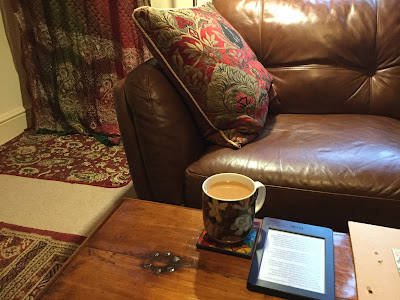 Normally I'd knock off work about now, and think about opening a beer while I start cooking my tea. However, I'm socialising later this evening, so I shall save the beer until then. So a quick sit down with a cuppa and a book and Radio 3 before I start cooking. 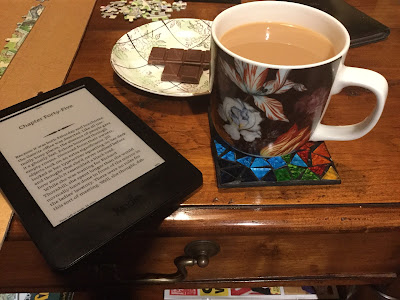 In the event, my social call was postponed to tomorrow evening, so I had a can of beer with my tea after all (that Abbeydale stuff is growing on me, just as I predicted it would ... or it might just be my tastebuds making a virtue of necessity).  And by quarter past eight I was ready to treat myself to a tenth cup of tea and the first bit of chocolate I've had in over a month.

And that, I think, is in fact a fairly typical day's tea consumption.
Posted by Sarah at 07:46