The blog tells me that I started re-reading Bryant and May in Full Dark House over breakfast on March 24th. I finished Wild Chamber for the second time on Thursday. I was then very frustrated that Hall of Mirrors, which I haven't yet read for the first time, hadn't arrived, and, indeed, still hasn't, so I've had to interrupt my Bryant and May-fest with some other reading. 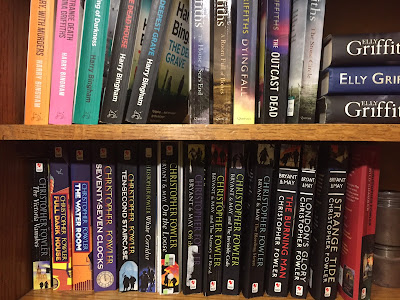 Nonetheless, my re-run of fourteen novels and a collection of short stories kept me going for just about a month - so that's an average of two days per book, but skewed somewhat by the fact that I got through five whilst on my six day enforced Easter holiday. The rest of the time I was doing a full time job as well.

I enjoyed re-reading Bryant and May; they are occasionally funny, sometimes sad, and usually ingenious. The plots are occasionally a little outlandish for my tastes, but the characters carry them off. The earlier ones - as the author acknowledges - are more outlandish, and whilst even the later ones are never exactly - well, credible - there's no obvious cheating, just some rather tortuous plotting. It was much better reading them in order, I found, as they do on the whole get steadily better. The first one I ever read was The Victoria Vanishes*, which seemed a little too odd at the time, although all is explained in the end. If I'd started with Seventy-Seven Clocks I might never have picked up another one, which would have been a shame. Also, in reading them for the second time I was able to recognise more of the clues and hints that anchor apparently surreal events in some semblance of reality.

I'm a bit stumped now as to what set to re-read next. I was going to go for Stuart MacBride's Laz McRae series (rather gory on occasion, but also very funny) but they don't seem to come cheap on the second hand market. Others I might investigate are John Harvey's Resnick (I did once have a full set, but didn't keep it) or even Ian Rankin's Rebus, some of which I haven't read for years if not decades.

Further suggestions welcome - especially if they can be picked up cheaply.

*Yes, I know it's first on the shelf; that's because it's smaller than the others and fits in underneath the bracket. It's actually sixth in the series.