Chertsey has a boat dog

Yes, who'd have thought it?  To be honest, although Jim and I had been toying with the idea of perhaps acquiring a dog when the cats were no longer around - we had got as far as discussing optimum leg length for embarcation and requisite degree of hairiness - all this has happened rather suddenly. The story in brief is here, and now Rocky's former owners have blogged about it, I feel OK to.

I first met Rocky a few months ago, and he immediately struck me as that rare beast - a dog that I like. Gentle, friendly and undemanding, (him not me) we hit it off straight away and he let me sit on his sofa and hold his paw, and stroke his lovely velvety ears. 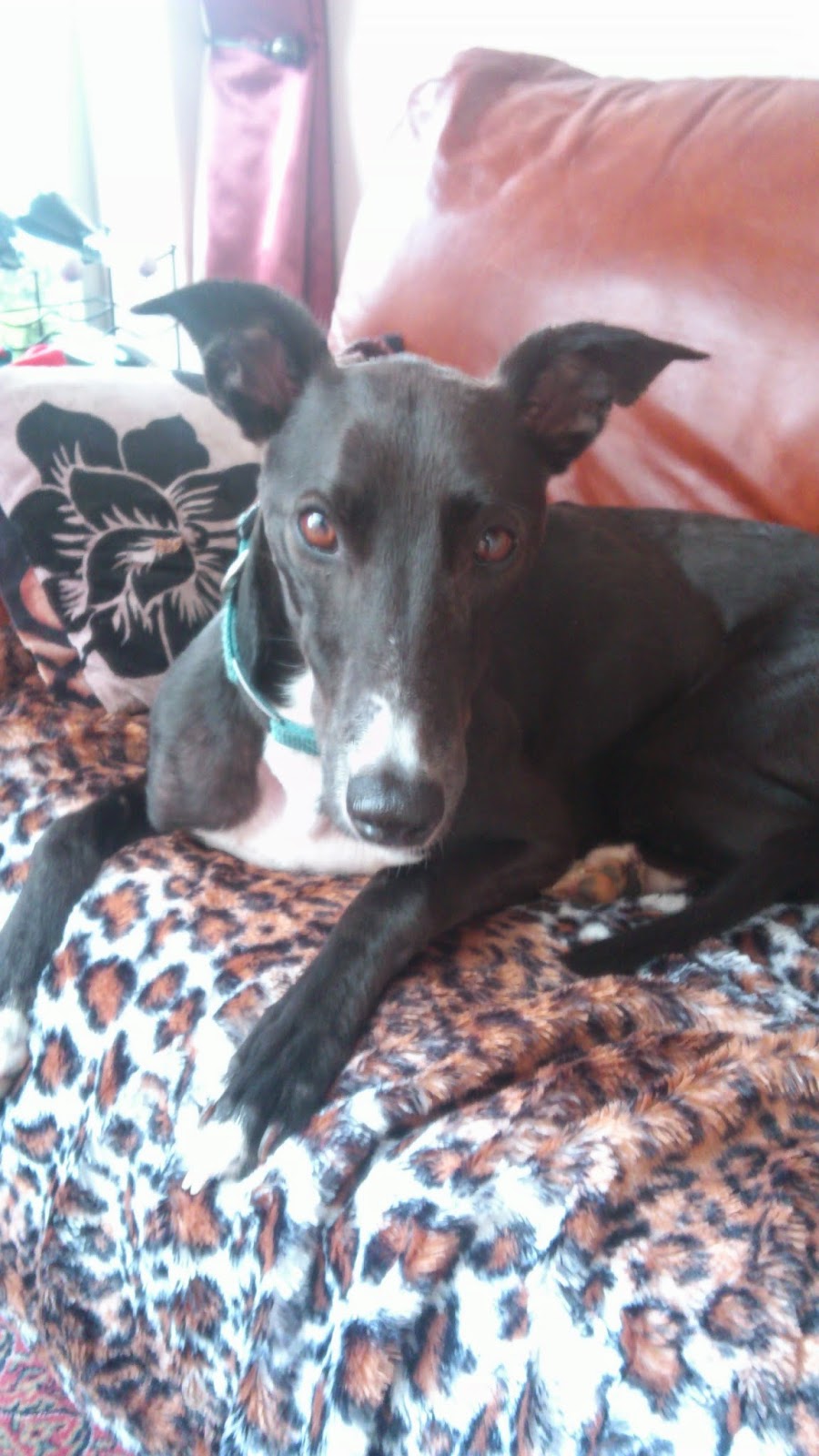 However, it turned out that the wilds of the Peak District, with sheep at every turn, wasn't the ideal environment for a greyhound - at least, not this one. After one scare too many, his mum feared that he would either die of frustration, or at the hands of an angry farmer. She determined that he needed a home away from the the tantalising temptations of what he could not help but see as prey. Because I'd grown rather fond of Rocky, I made a suggestion that might not otherwise have crossed my mind: perhaps Jim could provide that home. The area around Newhaven offers a wide range of walks, and while there are sheep, they tend to be enclosed and in predictable, avoidable places - unlike here where nearly all land is grazing land and animals are moved - or move themselves - into places where only they day before there were none.

So last weekend Jim came up to Sheffield, met Rocky on the Monday and after a walk and a pub lunch decided that they got on well enough to take him back to Newhaven that very night. I have to say that his previous owners were very brave in seeing this through, and it's obvious that they have put Rocky's welfare above everything. Rocky meanwhile has settled in well, attaching himself devotedly to Jim. Willow the cat has of course had his nose somewhat put out of joint, but seeing as he had more or less moved out to live on a part time basis with a number of little old ladies who fed him on best mince and kidneys braised in milk (I kid you not) my sympathy for him was slightly limited. The other cats just ignore him and hide themselves away.  Jim has built a special fence to give him a garden all of his own. 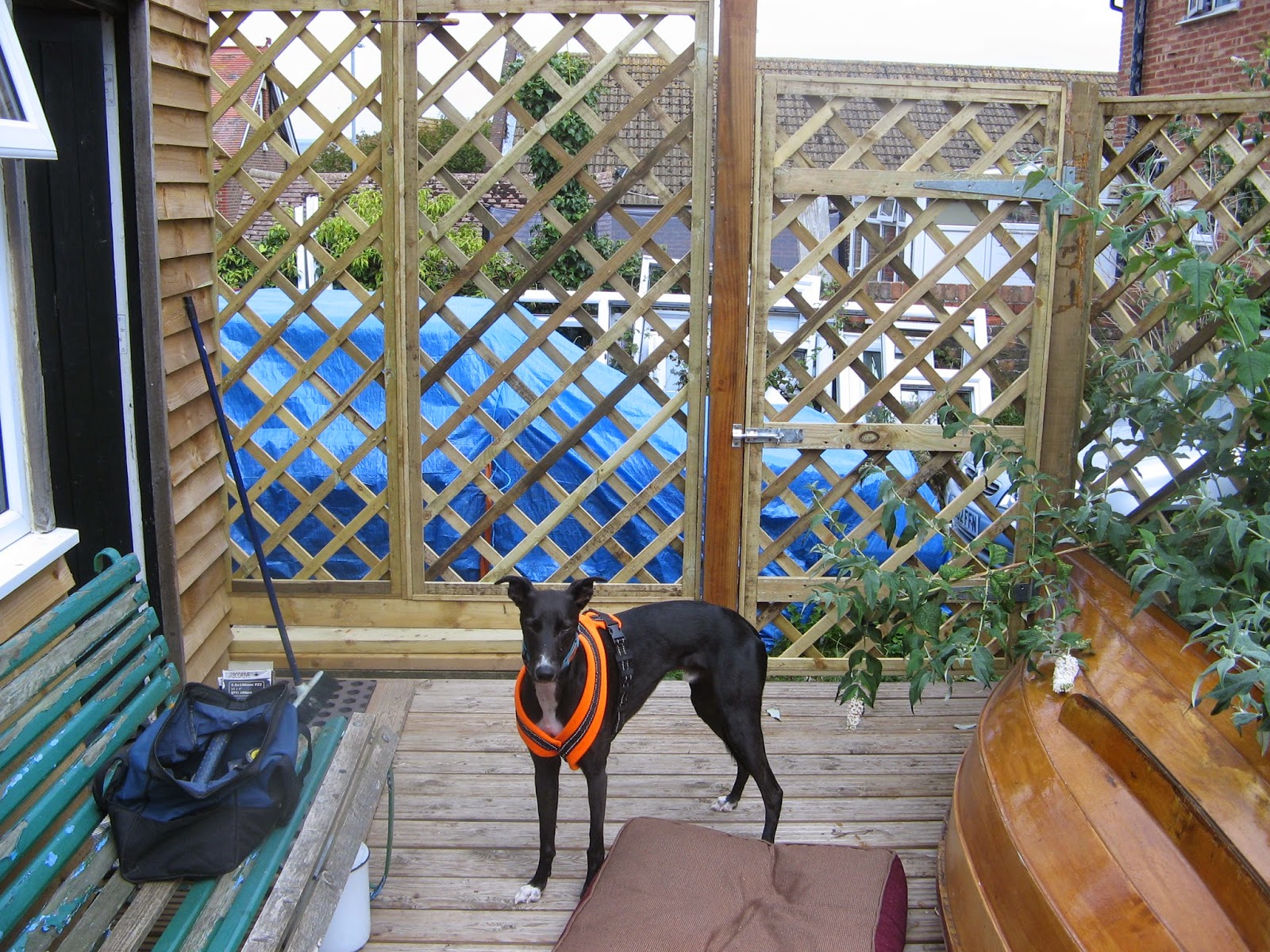 Rocky is rather exercised by cats, sheep and, it transpires, swans, but we can work on this. On the (very much greater) plus side, he is absolutely lovely with people, children and other dogs. He has already palled up with Aaron's dog Elmo and they are now walking buddies. 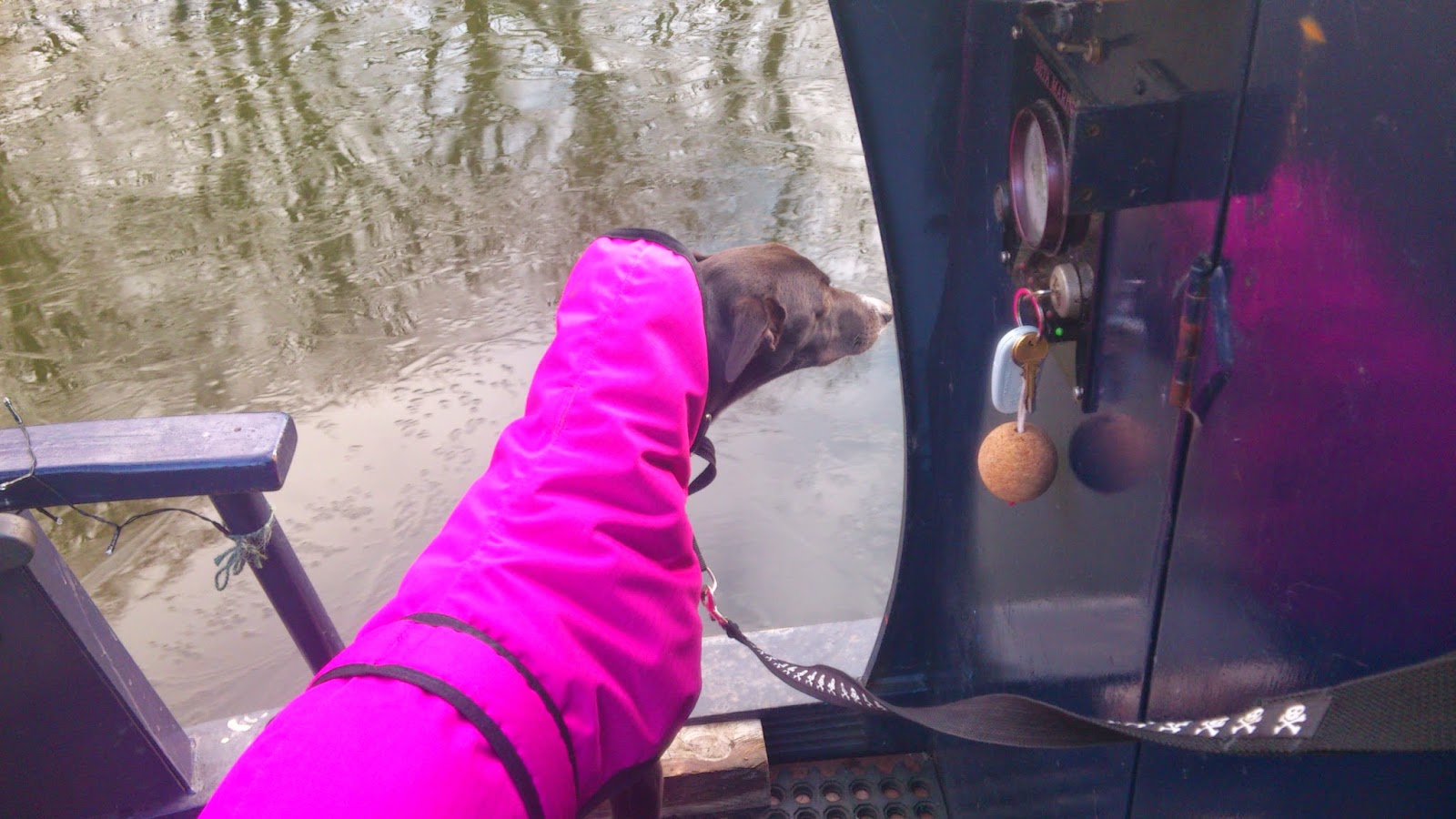 Rocky is three years old, and is a smallish greyhound (possibly part whippet). He's never raced (too small?) and has always been a pet - first to a single man, then to the crew of Princess Lucy, and now to Jim. As a bonus, he is an experienced boat dog. While he is longer of leg and smoother of hair than the fantasy boat dog we envisaged, I can't, of course, imagine any other now. I am sure he is looking forward to meeting everybody (human and canine) when we next get the chance to go boating on Chertsey.

If this works, you can find lots more pictures and stories of Rocky here.
Posted by Sarah at 18:38