On Sunday morning we moved Chertsey back along the arm to facilitate a photo call for the Blue Line boats that were there: Nutfield and Raymond, in Blue Line colours, alng with Stanton and Renfrew, two other boats that worked for the company. 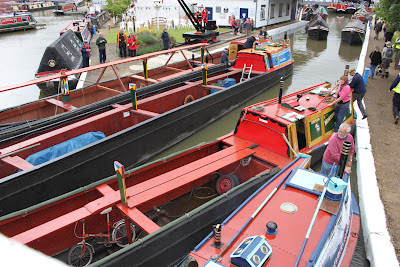 Somewhere I have picked up a bit of the history of the company, but I can't recall where to go back and check my facts, so forgive me if this is a bit vague. Blue Line was set up by Michael Streat (known as 'Mr Streaks' to the boatmen) and operated out of Braunston. It was Blue Line boats that were on the legendary 'Jam 'Ole Run' from Atherstone/Baddesley to the Kearley and Tonge works (which I think didn't actually make jam at the time? near Bulls Bridge - famously the last regular long distance commercial traffic, which ended in November 1970 (only three months after the far longer established Ashby Canal - Dickinsons mills coal traffic which Chertsey so briefly participated in). 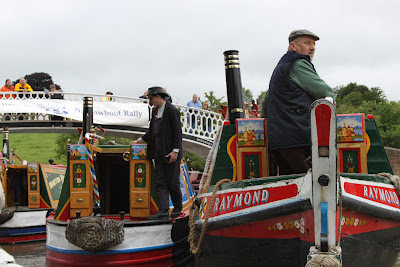 I'm not sure either how many boats Blue Line ran, or whether they owned or leased them, but they also included the large Woolwich butty Belmont (now in a sorry state on the bank at a 'water park') and Lucy, a wooden Nursers built boat currently being restored by Pete Boyce - now also co-owner of Renfrew - at Braunston.

Anyway, i think they got their photo - while I got some much more interesting ones of them getting lined up for it!

(I'm going to post on CWF and ask for additional info and corrections on this)
Posted by Sarah at 19:44