Things I will miss about Newhaven no. 1 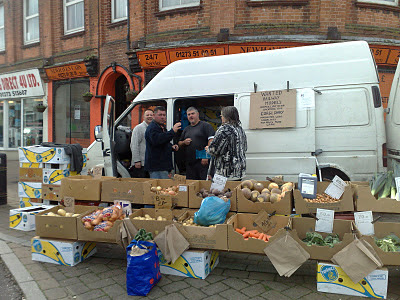 Geoff and Col (the two in the middle), purveyors of fine vegetables to the people of Newhaven every Thursday and Saturday.

Newhaven's street market, such as it is, was set up more than a decade ago now. At first it was quite busy, with a variety of stalls - hippy clothes, French foodstuffs, posh deli... Different stalls have come and gone over the years, but mostly gone. Not only can Newhaven's 11,000 population no longer sustain any shops to speak of, against the pincer movement of local supermarkets and the respective retail delights of Lewes to the north and Brighton to the west, but there was clearly no demand from the locals for anything more than cheap bags and fishing gear. Even these most basic and saddest of market staples tend only to be there on Saturdays, and not even always then.

But Geoff and Col, and their vegetables, collected from the wholesale market that morning, are there almost without fail. Good quality, cheap and seasonal, and you can always select your own produce too, unlike many market stalls. I go nearly every week and take inspriation for the week's meals from what's available. Today I came away with some bramleys (comforting apple crumble), celery, parsnips, mushrooms, onions (a nice winter vegetable stew, to be served with mashed...) swede, greens, sprouts... sweet potatoes (a creamy curry with coconut milk, perhaps), tiny little cooking tomatoes, too ripe to ever be sold in the supermarkets but perfect for a pasta sauce; a bag of mixed peppers and a tray of fresh chillies, again something I've never seen in a supermarket, not this many for £1.50, (for a chilli, served with...) two lovely ripe avocados. Plus bananas for Jim's porridge and a bag of potatoes... The basis of five meals, plus some chestnuts for fun, all for less than twenty quid.

Yes, there are other market stalls, and farm shops, selling more local, more exotic, more organic, (and more expensive) produce that we will come across on out travels, but this is one thing I will miss about Newhaven.
Posted by Sarah at 11:10