Bought at Braunston 2: a bit of brass

When I posted the photo of my new chimney on Friday night, I had just added a new brass to the chain - a lovely old and well-worn sun face which I think I got last year. Having discovered that it was quite easy to fix a normal flat horse brass to the chain with the join hidden behind one of the rosettes, I started to look for another one to fit below the other rosette (yes, as I heard someone discovering on Sunday, they are just held on with wire). I had quite a nice rose, but I don't know if you can tell without colour (orientation?) whether it's York or Lancaster, and I didn't want to get that wrong.

So off I went to the Friends of Raymond stall, mainly to tell them that Willow (or Willoughby, as they knew him), who had featured on one of their best selling cards, had died. 'We heard', was the rather surprising response - clearly his fame goes before him even beyond the grave. Then I started looking through their beautifully polished and arranged brasses, mentioning that I was looking for something to fill a gap in my chain, and the man (sorry, I really should know his name by now - he certainly knows mine) said he had just the one for me, and I snapped it up. 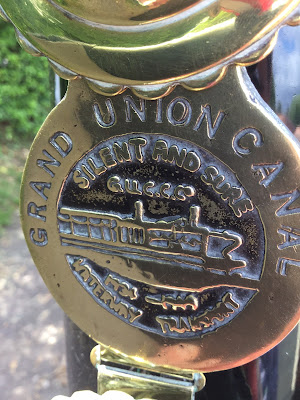 It's some kind of GU commemorative thing, but so badly cast it's impossible to read the dates and therefore to know what anniversary or event it's commemorating. The first date is 1934 - the year the Grand Union Canal Carrying Company was formed. The final digit of the second date appears to be a 9, and the one before it could be a 7 or a 9, but they would be funny anniversaries to celebrate (45 or 65 years). And anyway, it actually looks more like a 4 - so could it be 1949, and simply commemorate the life of the company? It's an odd brass, and I've no idea when it would have been produced as if that's what the dates are, they don't really give much of a clue. The relief writing, including the date, looks as if it was scribed into the mould by hand (if such a thing is possible). But it's a GU souvenir, and best of all, it has the company motto 'silent and sure', which I love. 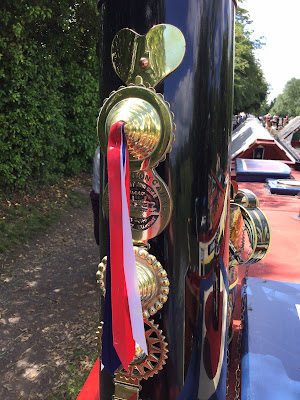 So this has filled the gap in the chimney chain, which like the rest of the boat continues to grow and evolve according to the law of whatever feels right at the time.
Posted by Sarah at 06:00