Remember Singapore? You could be forgiven if not, as things have been very quiet in relation to Jim's wooden sea boat. Things have not stood still, however; work has been progressing steadily at Frank Hall and Sons' boatyard at Walton on the Naze - it's just that for a change we haven't been directly involved. There is still plenty more to do and she probably won't be going back into the water until next year now, but we - and particularly Jim - are busy making plans for what happens then.

One thing we are going to need is a dinghy and an outboard for it, especially as Singapore is going to be kept on a swinging mooring. That's a buoy attached to a lump of concrete in the middle of the sea, to me, from which one requires a means of getting to and from land.

Well, as of last week, when Jim (with Bill and Michelle's help) collected an ebay purchase from Chepstow, we have the first of those requirements, a nine foot long Hyperlon inflatable dinghy.

It didn't have a name, as far as we know, so I decided it would be fitting to name it after one of Singapore's satellite islands. It turns out that there are masses of these - around sixty - but most have rather unmemorable names. Others turn out to be former leper colonies or the sites of spectacular petrochemical disasters. Lazarus Island, on the other hand, is apparently a peaceful holiday resort. It also seemed like a fitting name for a dinghy which will be deflated and stored away at the end of each season, only to be resurrected the next. 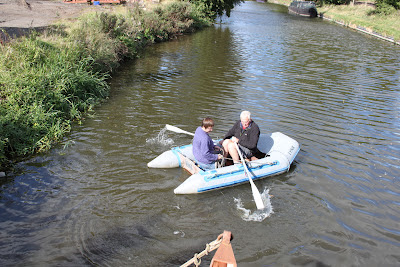 Of course, we had to try it out, and it was very successful, at least on the nice flat canal. Our rowing technique wouldn't stand up to Amy and James's scrutiny, but I managed to get us over the aqueduct and back. Not quite Tom Rolt crossing Pontcysyllte in a coracle, but a start.

Thanks to Iain for taking the photos.
Posted by Sarah at 17:29