Without wanting to be obsessive about it, I do like to keep an old fashioned feel in Chertsey's cabin. It's a chance to use all the old bits and pieces I actually like to have around. In many ways it's practical too - for example, I keep my enamel washing up bowls under the stove, where I'm not sure a plastic one would sit very happily. I'd love to live in a world where it was possible never to buy anything plastic - such a nightmare for resource usage and subsequent disposal (and more than other materials, plastic does seem to be treated as disposable, despite its durability; maybe because its cheap and easily made into fashionnable shapes and colours) - but it's very very hard to avoid. I certainly don't want to be looking at it in all its gimcrack garish forms more than I have too though.

What I do like is enamel. Always have has a soft spot for this heatproof, easy to clean and cheap (albeit chippable but otherwise everlasting) all-purpose material (or combination of materials) of its day. Plates, jugs, trays, ovenware; hopsital equipment; fire surrounds... pub ceilings - its versatility must have seemed endless. 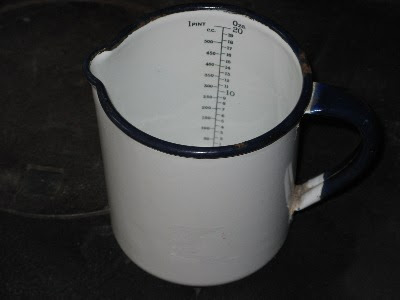 Until now though Chertsey has lacked a decent enamel jug. I've had a few, but all too battered and rusty to actually be used. However, whilst Christmas shopping yesterday in the charity shops, antique shops and flea markets of Lewes (finished off with an excellent and very reasonably priced lunch at the Lewes Arms, just thought I'd get a plug for that in) I came across not one but two; and not just milk jugs or pitchers, but proper measuring jugs, so I treated myself to the nicer of the two. At six quid it cost about fifteen times as much as a cheap plastic one, but well worth it I think. I shall put up a hook for it and dsiplay it with pride, and use it with pleasure.
Posted by Sarah at 09:18