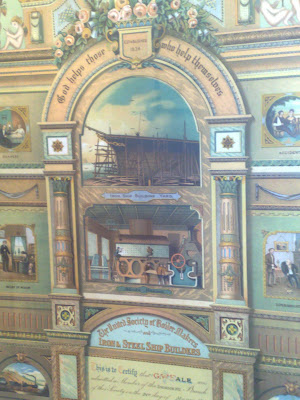 It's my sister's birthday today - very neatly timed to be exactly six months (yes, and three years) from mine, and that reminds me that I promised to send her some photos of the wonderful colour lithograph certificate presented to our grandfather by the United Society of Boilermakers and Iron and Steel Shipbuilders in 1924, in appreciation of the work he'd done for them since joining in 1915. This is the grandfather - our father's father - who was a boilermaker on the Great Western Railway at Swindon.
It's been very hard to get a decent photo though, without taking it out of the frame (which I am certainly not going to attempt!); whatever I do I don't seem to be able to avoid getting very visible reflections in the glass. 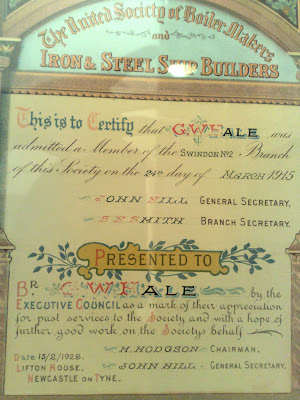 I wish I could show you the real thing; it is stunning. The whole thing in its lovely gilt frame must be about two and a half by three feet. The colours and the detailed illustrations of the Society's work (relief of widows, help in sickness and old age) are wonderful.

The United Society of Boilermakers and Iron and Steel Shipbuilders (itself formed from the amalgamation of earlier societies) existed for over a hundred years, from 1852 until 1963, when it joined with the Associated Blacksmiths', Forge and Smithy Workers' Society and the Ship Constructors' and Shipwrights' Association to become the Amalgamated Society of Boilermakers, Blacksmiths, Shipbuilders and Structural Workers. This in turn amalgamated in 1982 with the General and Municipal Workers' Union to form the GMB Union, which went on to become part of Unite. It doesn't have quite the same ring to it does it. I got the history from this website.
For many years the certificate was on display at the British Engineerium, the former pumping station in Hove that was turned into a steam museum in the late 1970s. My father worked there after he retired, doing the books, taking round school parties (German speakers a speciality) and stoking the boilers. When he died I inherited a signed agreement that he had loaned it to them, which, fortunately, I kept very safe. A few years ago we read in the local paper that the Engineerium was to close, and that all the exhibits were to be auctioned. We dashed over, me clutching my piece of paper, to find Bonhams already setting up for the auction. One of the founders of the museum was there and was very loath to part with the certificate, insisting that it had been a gift! I waved the loan agreement - which actually might have been signed by him in person - as we fought our way out carrying my treasured inheritance, which now hangs proudly in the front room. As a postscript, the auction was called off at the eleventh hour when a local property developer 'saviour' stepped in. It was claimed then that the Engineerium would re-open, but it's been watch this space ever since.

While we're on the subject of my relatives, my cousin Tina (aka Yvette; she always had two names which I think reflected parental disagreement over what to call her; for ages I thought I had an extra cousin somewhere) has just restored Nelson's easy chair.
Posted by Sarah at 16:48