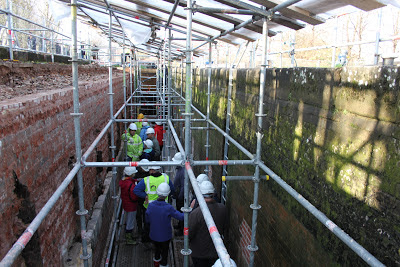 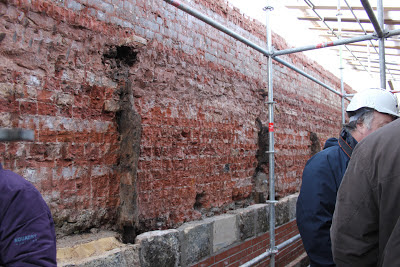 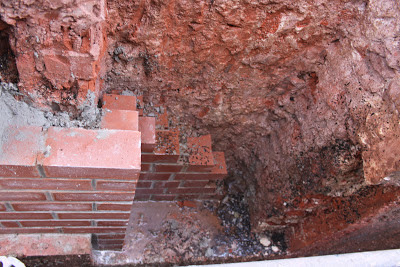 Goodness, why has it taken me so long to add Nick's Eileen blog to the old boat blogroll? Nick won the great 'how many candidates will stand for the boaters' places on the CRT Council' sweepstake back in January; I've met him, and heard about his ongoing project of a 1903 day boat, BCN no. 18686, aka Eileen; I knew he had a blog; I've even looked at it. You should too - it has some stunning photos.

Tomorrow: I travel seventy miles to look at a hole in the ground.
Posted by Sarah at 08:46 2 comments:

At Sheffield station this morning, I had pressed upon me not one, but three, free samples of the much advertised Belvita 'breakfast biscuits', designed for people who don't have time to stuff a bit of toast in their mouth before leaving the house but prefer to cover themselves in crumbs on the train instead. Unwrapping a 59p packet of two took me back to my childhood - they were like nothing so much as the 'Limmits' meal substitute biscuits on which my mother vainly tried to lose weight in the 1970s. A sweet, digestive-y type biscuit sandwiching a 'creamy live yogurt filling' (yeah, right. 'yogurt powder 3%') with oooh, added minerals and stuff so it sounds like proper food and not just a biscuit.

According to the packet 'Belvita Breakfast Yogurt Crunch are truly exciting'. I'll just repeat that. A digestive biscuit with a sugary filling containing powdered yogurt is TRULY EXCITING.

What are they thinking when they write this stuff? Do they think people will buy it in the hope of a thrill? Are their lives really so dull and bounded by biscuits that they actually believe it? Is it the result of hyperbole inflation? What is left, other than ironic English understatement, to describe things that really might arouse a flicker of interest in a jaded populace?

Or maybe it is the idea of being someone so busy and important that they are above eating breakfast like ordinary mortals, but must instead snack on a 1970s diet biscuit (which apparently can be part of a balanced breakfast when accompanied by a latte and a banana... Just eat the sodding banana!) because they are so modern and zetgeist-surfing.

Anyway, as I got given a freebie, I thought I would review the 'truly exciting' Brevita Breakfast Yogurt Crunch Biscuit.

Boss eyed in the blogosphere

I have added Angry People in Local Newspapers to the blogroll, as I still find it quite amusing (even if some of the captions pall after a while). Finding absurdities, over-the-topperies, and sheer acts of people taking themselves too seriously in the local press has long been a source of entertainment for me on the long winter evenings. Few things will better the sub-editor in the Brighton Argus who saw fit to headline the story of a clearly mentally ill man self-harming to the extent that he got gangrene 'Man Kills Himself with Giant Novelty Pencil'. However, APILN, and its sister website Lib Dems Who Point* (and I have been one of those in my time) does collect together a treasure trove of pictures of people trying to look cross. Sometimes the story is worthy or serious comment (and the anger justified); more often however it's concocted almost entirely for two minutes of local fame (or infamy) before becoming chip wrapping.

Not having anything else to read last night, I spent a few hours following up some of the sites APILN links too. I was astounded to discover what goes on between the covers of Chat, Take a Break etc. and feel fully vindicated in never having handed over a penny for any of them or their ilk; I have also learnt (no, I honestly had no idea before) what extremely fat women look like with no clothes on. Or almost no clothes; modesty dictates that they wear some kind of bra for the photoshoot, but other undergarments are rendered redundant by obscuring cascades of flesh. (Although come to think of it, they probably have got something on down there, you just can't see it). Obesity, incest and clairvoyance (with a nice line in psychic animals) seem to be the staple of these housewives' favourites.

Then I looked at Speak Your Brains, basically a collection of comments on online news stories, before I realised that too much laughing at stupid people on the internet is not really good for the soul and I had to go and have a shower.

Whilst fiddling, I have also changed Sandbach to Badger, to reflect George's change of boat.

*Doesn't appear to be working at the time of writing, though it did the other day.
Posted by Sarah at 12:34 No comments:

Ever since being shown Blossom's splendid collection of pot hooks at Alvecote, Jim, unbeknownst to me, has been watching out for some on ebay. Today, after meeting a man from Wolverhampton in a pub car park, he came back with these.

They were supposed to be for Christmas but they were so marvellous he couldn't wait. There are five delicately worked ones in brass, and four chunkier copper ones. And - would you believe - he was the only bidder and got the lot for £10.50.

Now we need to find a rail to go over Bakewell's range, to make good use of all of them. Well done Jim!

A non-boating blogger from London posts a piece that puts most of our efforts to shame. I have commented with a link to my post which in turn has a link to Captain Ahab's excellent articles from this time last year. Hoping that DG's having an extended stay in the West Midlands and that there's more to come!

Yesterday saw the bi-annual fun and frolics of an HNBC 'social' (I am not convinced that 'social' is a noun, but we will take it as an implicit abbreviation of 'social event'. Being on the committee, Both Jim (who is not Events and Awards Officer) and I were meant to be there at ten. We were a bit late however, as, for all its virtues, the free Navfree satnav app is a bit optimistic about journey times. We were also somewhat perplexed by the route it had chosen, until I investigated and discovered that it was still set to avoid motorways, and had been ever since we had the oil leak in the previous Volvo.

The afternoon's entertainment this year was provided by Tony Gregory, who had put together a really good show of photos from the 1940s and 50s, mainly of the BCN and the Wolverhampton locks. I finally learnt why lock twenty is the only one to have a single top gate - it was added twelve years after the original twenty locks were built, to save water, and the standard for the BCN had changed in the meantime. The secong half of the presentation included some compilations of cine film put together by Keith Christie. This was less successful as much of the film had not transferred very well to the digital medium, and it was largely reliant on Tony Gregory reading out Keith Christie's written commentary.

There was an excellent bonus though. Tony had brought along a number of items he had salvaged many years ago which were looking for good homes, and for a small donation to charity, they found them. The items in question are, I understood at the time (but see below), 1966 reprints* of 1886 Grand Junction distance tables. I only have a terribel iPad photo, but you can see they take the form of the tables you get in motoring atlases, whereby you can read off the distance from any one place to another. There are also smaller tables for each arm.

*Update - firstly to remove the awful iPad spelling, but more importantly to add what Tony Gregory has subsequently sent in an email: the tables were salvaged in 1966 - so could be any age. Maybe the original 1886 printing, even? Tony sent an account to be printed in the HNBC newsletter, so I am sure it will be all right to reproduce the relevant bit here:
'These had been in a wardrobe at the home of the late George & Olive Andrews since they collected them from Thomas Clayton (Oldbury) Ltd., when their canal carrying operations ceased in 1966.'
Posted by Sarah at 14:25 4 comments: