Back in the back 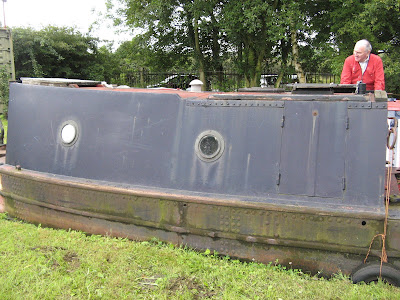 Unbelievably, I haven't visited Chertsey since the end of October and although I know it's in good hands, I'm itching to get back and see it and touch it and smell it again. On the last morning before I left, on a bit of an impulse, I started repainting inside the back cabin. (Not so much of an impulse that I hadn't already rubbed it down and properly prepared it, of course....) Now we all know what back cabins are meant to look like - graining, roses and castles, lots of brass, lace, and every surface covered in ribbon plates. I was reminded of this the other day by Blossom's splendid post on how to hang plates for best effect. So I guess it's time to make a confession - they are the one bit of back cabin tradition that I really don't like, so my own tiny rebellion will be not to have any, shock horror.

The rest of it, I will have.... eventually. But not yet. Chertsey's back cabin, as it stands, is a little bit unconventional - not that you'd necessarily notice from the outside. Presumably, when Richard Barnett bought it in 1969, it would have had a BW issue plywood cabin. He built a new one - out of solid oak, shelves salvaged from Colne public library. I believe it was intended to be a stand-alone wooden cabin, but it must have leaked, because he went on to have it skinned in steel. Anyway, what we have inside is not softwood grained to look like oak, but oak itself, dark and varnished. Rather untraditional, but very much part of the boat's character. Within this, there is the traditional fit out, in various bits of softwood and hardwood, serviceable but by no means done to the highest standard. It was rather sad to note that at some point an ochre base coat had been applied, presumably for graining that never got done. 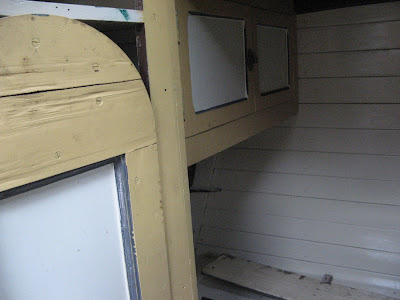 And won't do for a while. The thing is, at some point the cabin is going to have to be replaced, probably, when I am rich, with a replica Woolwich style cabin in steel. Until then I am going to glory in Chertsey's oddness, and not expend too much money or effort on internal decoration until such time as I can go the whole hog. Instead I am going to paint it austerely in cream, with dark green mouldings, and leave the oak varnished as it currently is. I shall also leave the old, worn and rather grubby graining of the side bed exactly as it is - maybe a light clean and a fresh coat of varnish to preserve it. Likewise on the back doors. 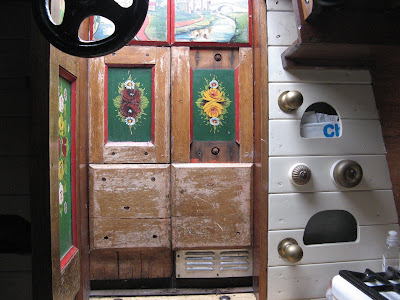 I shan't say no to a bit of brass though, as and when I can lay my hands on some, and some lace - I already have one nice piece, and now have great hopes of my mother, who seemed quite pleased to receive a pattern book, two hooks and a ball of white cotton thread.

The Epping stove is purchased, and waiting to be fitted and, in a wonderful display of priorities, I am fully kitted out with crockery (well, it seemed important at the time) although I forgot the cutlery. Soon, hopefully, work will start on the engine, and all that important stuff, but I must admit that also, I can't wait to get back and play house.
Posted by Sarah at 18:25