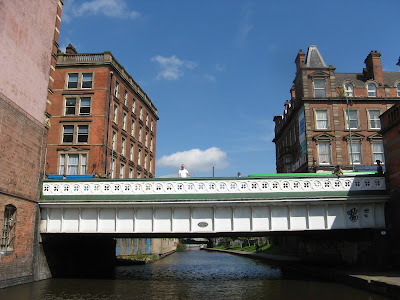 illustrated with a random photo of Nottingham

Before Christmas I went to visit my friend Dean in his new house in Brighton, and we went to the local church fete (you do that if you're a Londoner newly moved to the provinces). We got there just as it was winding down and got lots of bargains. I won a bottle of wine on the tombola, and bought a very large jar of pickled red cabbage (let no one say I'm not good to Jim), and on the bookstall, reduced from a pound to fifty pence each, six books by John Harvey. I'd read other books of his as part of my random library trawl and really enjoyed them - well written atmospheric thrillers with good, sympathetic characters - but these were even better - six of the ten books in his series featuring Nottingham detective inspector Charlie Resnick; a great police character, a loner with a liking for jazz, cats and messy sandwiches. I read them (six in a row - what a wonderful indulgence) over Christmas, and have ordered the other four from the library.

I don't know Nottingham well - I've been there a few times, but mostly only to the University, which is out of town, and we went through by boat last year, but the sense of place in the books is very evocative and accurately represented. The canal and the river get a good few mentions (and we will forgive him one reference to seeing a 'longboat'), but I was particularly fascinated by this brief extract from the final book in the series, Last Rites:

Romanticising [about the old terraces at Notts County, this was], Resnick knew, and as dangerous as the efforts to dress up the past and sell it sanitised that drew tourists to the Lace Museum and Tales of Robin Hood and even the Galleries of Justice, where for a few pounds you could inspect the old police cells and the tunnel along which deported prisoners were shepherded into canal boats on the first part of their plague-ridden journey to the colonies.

I've had a look at the Galleries of Justice website, but it doesn't mention this particular aspect of their offering. Has anyone been, or know anything about this practice?
Posted by Sarah at 14:07