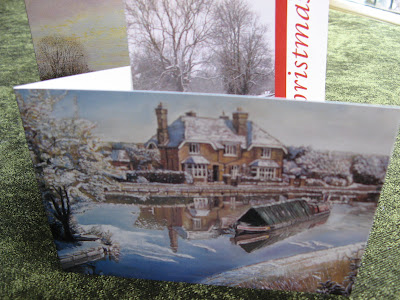 Now the Christmas cards are finally down, it's time to start thinking about buying next year's.

This year we received a disappointing three watery themed cards, including a personalised one from nb Lucky Duck, and only one IWA one featuring a wintry painting of an old boating scene.

I used up the last of my IWA ones this year, hence the need to buy some more from their online shop. In the past I've purchased the bargain bumper packs of cards that haven't sold very well, but I found that the last one contained rather too many scenes of wherries, flats, keels and the like, and just not enough narrow boats (I guess there was a reason for them being left over). So this year I have been a bit more selective, and chosen some older (and thus cheaper) designs. In fact, I've only bought one pack, because the link to the ones of the horse boat on the Regents Canal didn't work.

I have also ordered a rather mysterious pack of 25 'Greetings Cards', with a scene of Cassiobury Bridge, for £4.95. I say mysterious, because that seems cheap for so many, so I am wondering what the catch is. I have long bemoaned the fact that the IWA don't produce packs of blank, all-purpose, cards on the same basis as the Christmas cards. They do sell some packs of 'all occasion' cards, but they all feature modern photos - not what I'm really after. So it will be interesting to see what these ones I have bought turn out to be. Twenty-five is rather a lot - I don't have 25 friends, so people might get the same birthday card a few years in a row.
Posted by Sarah at 14:46