Here at last, as promised, is a bit of background information about Chertsey. Most of it comes from The George and the Mary, AMModels, and other published sources, but I am also greatly indebted to Pete Harrison for providing me with a wealth more detail, some of which might creep in here. Any errors are more than likely my own, and I would be grateful to anyone who points them out.

So, to start near the beginning, it's the early thirties and canal carrying, at least on the Grand Union, is in a mood of buoyant optimism, not to say hubris, leading to an enormous expansion of the Grand Union fleet between 1934 and 1938. There were a few exceptions, but the majority of the motor boats were built either by Yarwoods at Northwich, or by Harland and Wolff at Woolwich (while butties were built by these builders, plus also some wooden ones by Walker Bros of Rickmansworth). Hence Northwiches, Woolwiches and Rickies, large and small (and in the case of Northwiches, middle). The first phase, between 1934-6 were 'small' and were loosely named after heavenly bodies, hence have subsequently become known as the 'Star Class', of which there were 78 pairs. Then from 1936-37, orders were placed for a further 86 pairs, with a deeper (a whopping four foot nine and a half inches) hold. These 'large' boats were named, in essence, after railway stations, and became known as the 'Town Class'.

Chertsey is one of these last, a Town Class Large Woolwich motor boat.

It was built as part of an order placed with Harland and Wolff for 24 pairs in February 1936, and was delivered to GUCCCo on the January 29th 1937, and given the name Chertsey and the fleet number 130.

Canal carrying in many parts of the country had been in trouble for some time, and some canals were becoming abandoned and derelict even before the war, but the G.U. seemed to be bucking the trend. It couldn't last however; having survived the expansion of rail transport better than many other waterways, it was no match for the expansion of road transport after the war, coupled with the exceptionally hard winter of 1947. In fact, only about 120 pairs were ever in service at any one time, even in its heyday. By 1948, when the waterways were nationalised, the writing was on the wall. The GUCCCo fleet, being directly owned by the canal company, automatically went with the canal into national ownership; it is a sign of how hard things were getting that Fellows, Morton and Clayton, the other great fleet, which was independently owned, voluntarily sold out to the Docks and Inland Waterways Executive the following year.

From this point on many boats were disposed of - sold to other operators, abandoned, sunk, converted to maintenance boats, transformed into parts of the British Waterways hire fleet, trip boats, or sold into private ownership. Chertsey however, remained in the British Waterways (as it became) carrying fleet until the early 1960s. It was finally sold by BW into private ownership some time between 1962 and 1964, and then appears to have been converted into a houseboat. This is the period about which we have least information, although Max Sinclair has posted photos of Chertsey at Stratford upon Avon in 1964 on CWF.

In 1969, Chertsey was purchased by Richard Barnett to become the first boat (and the only narrow boat) in what grew to be a fairly large and eclectic collection of working boats. It was clearly his intention to work it, and Chertsey must surely have been one of the earliest examples of a boat being deconverted as he restored it to a working state. I still know little about what Chertsey did under his ownership, but it included bringing coal from the Ashby Canal to the papermills on the G.U., and acting as a tug dredging on the Soar. 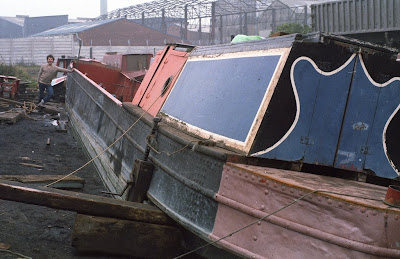 Chertsey with Richard Barnett - late 70s/early 80s?
By the early 2000s, Richard Barnett had become ill, and from this point - if not sooner - Chertsey was effectively abandoned. In early 2009, he died, and his executors began the daunting task of finding buyers for his boats - of which, of course, I was lucky enough to become one.

So that's a little outline of Chertsey's history, particularly regarding its ownership. There are boats that have had fewer owners over their lifetimes, but not many.
Posted by Sarah at 12:37