Don't carry tea in your hat

One of the idiocies of the modern world with which I will have no truck is the 'reusable' cup which is designed to look like a disposable one, complete with Tommy Tippee lid. These are, apparently, made of compostible bamboo fibre, held together with 'resin'. Be that as it may, because they have no handle, they also have a silicone plastic sleeve, and the aforementioned lid, made of actual plastic. They - looking at my colleagues' - seem hard to keep clean, and not very durable. So much for being environmentally friendly.

I have a reusable cup. If I take care of it, it will last forever. It's a china mug. If it gets cracked, or chipped, or the handle breaks, I can use it to keep pencils in. If I do ever need to dispose of it, it is at least inert and non-polluting, and could be used as a very small amount of hardcore.

However, on Thursday, for the first time, I wanted to take a cup of tea from one building to another, as we were having an early meeting in the second building. As I hadn't yet got round to buying a lid for my mug  (I have just ordered one now), I found a paper cup which just about wedged in the top, and thought that that might serve the purpose of preventing it slopping over the sides.

It was very cold on Thursday morning, so I wrapped this arrangement of mug and paper cup (which I had stabbed in the bottom with a pencil to let the steam out) in my woolly hippy hat. This is a splendid hat, made of rainbow striped wool with a lovely fleece lining, which accompanied me on the epic 2010 icebreaking trip from Kings Bromley to Great Hayward, where we gave up and left the boat frozen in for six weeks. I am very fond of this hat.

To cut to the chase, it didn't work. By the time I'd crossed the road, the package felt distinctly damp; when I arrived at The Diamond (shortlisted for the 2016 Carbuncle Cup, and in my view it wuz robbed) it was actually dripping. So I stopped by a recycling bin and got rid of the paper cup, mopped myself down, and went off to brainstorm a whole department approach to the student journey for a couple of joyful hours. I still had about two thirds of a cup of tea, and it was still hot, so that could be counted as a partial success; however, my hat was in no state to be worn home. 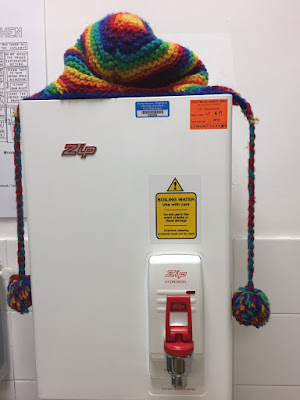 I put it on top of the water boiler in the office in an attempt to dry it out. None of the radiators in the office is turned on, because the office mysteriously maintains a temperature of 29 degrees centigrade throughout the winter without them. We think the Careers Service on the ground floor has some sort of thermonuclear device. When you enter the office on a cold January day, you have approximately ten seconds to remove eighty percent of your clothes before you expire from heatstroke.

When I got home I ran a sinkful of warm water and Woolite, and washed my hat. My god, it was filthy. As filthy as I suppose you'd have every right to expect a hat that hadn't been washed since going boating in 2010 to be. And now it's all bright and sparkling, having dried on my patent woolly hat drying device, viz. a long-handled sieve wedged into the radiator. So all's well that ends well, but nonetheless the moral of this story is, don't carry tea in your hat.
Posted by Sarah at 06:00