Two and a half years ago, I got very excited because I had run a mile for the first time in my life.

Yesterday morning, I ran a mile and a half: the furthest I have ever run, non-stop, in my life.

I haven't been completely idle inbetween. I ran that old mile, along the A57, a few more times; slipped out of the habit a bit in the summer when there was boating to be done, and in the winter when it was too cold and frosty, and in the autumn when it was too busy to think about anything... But it stood me in good stead; I found that I could trot along the towpath at a useful speed for useful distances, and I started to actually genuinely enjoy and look forward to an early morning run (I can't quite fancy it any other time).

Then I moved house. And spent the best part of nine months working on it (along with Jim). And once the dust had settled, what I quickly noticed was that there was nowhere I could set off for a run from my new house without tackling some serious hills. 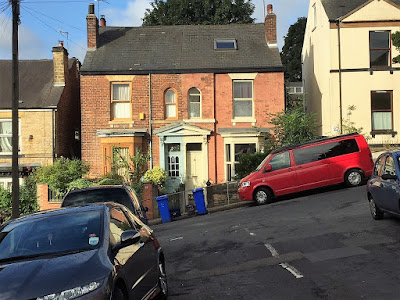 So for another few months, I didn't.

Even without deliberately going out exercising, I've developed serious 'Sheffield legs' - calves like I wouldn't have believed - negotiating Blake Street on the way back from Tesco's, the library, and most days, work.

Then I thought, well, the hills aren't going to go away, so I might as well make a virtue of them. I worked out a one mile circuit that involved going up a fairly steep hill, down an more gradual one, then finally (in a fit of masochism) up Blake Street (which is the one in the photo if you hadn't guessed, and is, according to the BBC, the third steepest residential street in Britain. There was a Welsh one in the news the other week competing with New Zealand's steepest street, but I don't think it was residential...) Obviously I couldn't run the whole of that mile (yet) but I have managed about two thirds of the Blake Street section (yes, uphill), and all the downhill bit of course. So that's been good exercise, but I still missed the possibility of running consistently for a decent (for me) distance.

However, I think I've sussed that now too. If I go downhill a little bit (and am prepared to come back uphill on the way back) I can run along the Langsett/Middlewood Road which, while not completely flat, is certainly not hilly (as its status as a tram route attests). I tried it for the first time just before the weather got really cold (I'm not risking my neck if it's icy) and managed a mile and a quarter (including the first downhill bit from home) non-stop running before I turned around and came back.

Yesterday morning it was mild enough to have another go, and I needed to take Bluebird to Malin Bridge to be nursed through her MOT, so having arranged to drop her off really early, I ran back - all the way to the bottom of the final steep bit, which was a mile and a half mostly not downhill.

I'd better keep it up if I'm to be in shape for the Hebden Bridge foray.
Posted by Sarah at 06:00