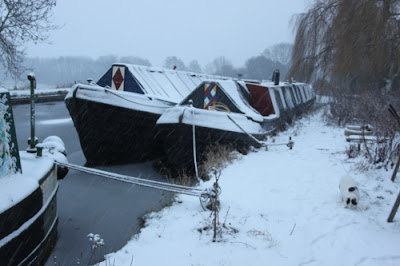 We were looking forward to an an enjoyable day today as Amy and James from Lucky Duck were visiting. Jim set off to meet them at Penkridge station, stopping on the way at Jaspers to stock up on buns, and at Midland Chandlers, strange as it may seem, for coal. The 'Stoveglow' they sell is slightly cheaper than Taybrite, seems to burn just as well, and leaves far less ash. He bought their last six bags, which might turn out to have been prescient. 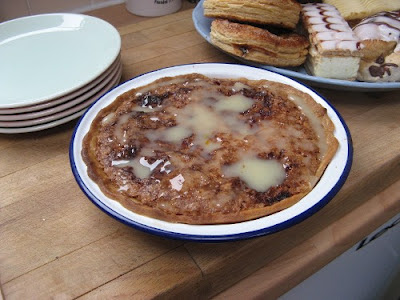 Amy had made us a fantastic Bakewell tart. She thought we would have been given loads of them (just as they are always being given novelty duck gifts) but I had to say that while I'd had plenty of jokes about me now being the Bakewell tart (to which I invariably reply that I'd rather be a Bakewell tart than a Bakewell pudding, hee hee, so you needn't bother making that joke now), no one had actually presented me with one before. Amy is going to put the recipe on the Lucky Duck blog; I will just say that it was slightly off the traditional and was absolutely wonderful. And I'm not just saying that; I had three slices. And then, as we were drinking tea and eating buns, it started to snow...

And we went into Brewood for lunch at the Bridge, and it continued to snow; we came back for more tea and buns, and it snowed some more. We took photographs of the snow, and it snowed more still, and by the time Jim left to take Amy and James back to the station, traffic on the A5 was barely moving, and he only just managed to get back up the drive on his return. Meanwhile Willow had chosen today of all days to fall in the canal, misjudging his leap in the snow from butty stern to bank. Fortunately it is very shallow and gently shelving there so he got out without trouble but was a most pitiful sight. However, after a good rub down by the fire and a bowl of warm milk he appears to be restored to his fluffy self - just a little wiser we hope. I was unkind enough to take photos of him in his bedraggled state, but I'm not unkind enough to post one, so here he is earlier, trying to camouflage himself in the snow. 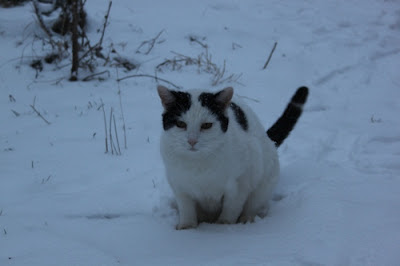