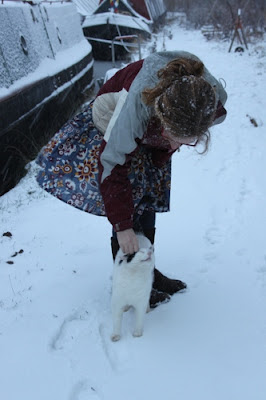 Amy and Willow yesterday
The snow has gone almost as quickly as it came. By half past nine last night rain was falling, and it became much milder. There was still plenty of snow on the towpath as I walked into Brewood this morning. A few people had walked over it but I could still clearly make out the tracks of birds with big feet (coots perhaps), birds with small feet, and a rabbit. Along the side of the road were prints like a dog's, but with no human ones beside them, so I concluded that it might have been a fox. The going along the towpath was fine; it only became difficult once I got into the village, where the snow was trampled into ice on the pavements, and thrown into drifts of brown slush in the gutters. As it was so much milder, by the time I left the Co-op I had divested myself of woollie cardi and scarf. I walked for a while along a very posh lady who had just bought the Sunday Telegraph. She asked, wasn't I cold - as my top layer now consisted of a rather flimsy looking shirt. When I said no, she said, oh, what it is to be young, which was nice, but I thought I couldn't really collude in this untruth, so I said that I used to feel the cold, but had since discovered the miracle of layers. Ah yes, she said, layers. And thermal underwear, I said. Oh yes, she said, thermal underwear is marvellous. And so they are and so it is. 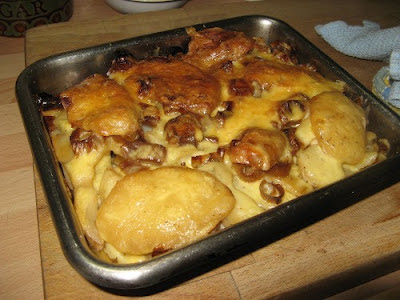 And for a rather dodgy link (recipe alert Nev!), dinner also consisted of layers. We bought some Jerusalem artichokes in Cannock last week, largely because you so rarely see them. The only time I'd had them previously I made a soup, but looking for something a bit different, I consulted the Blessed Delia. She said that they were good as a replacement for potatoes in potatoes boulangeres, and the recipe for that said that you could use leeks instead of onions, so here is what I did: Peel and thinly (1/4 inch) slice some potatoes (because I didn't have enough Jerusalem artichokes for the whole lot and, you will recall, we have a big sack of potatoes). I then parboiled these for five minutes even though the recipe didn't call for it because experience has taught me that potatoes never cook in the oven otherwise). I did the same with the J.A.s, and sliced but didn't pre-cook the leeks. Then layer these in a well oiled or buttered tin, starting and finishing with potatoes/J.A.s. Pour over about half a pint of stock. Lacking foil I then covered the tin with some baking parchment, and put it in the Epping, which was running at about 100 degrees C. After a couple of hours it was cooked and the top nicely browned, but I indulgently sprinkled it with grated cheese and put it back for another 45 minutes or so, uncovered. I have to say that to my mind this is not the most exciting dinner ever, but it was warm and comforting, easily cooked in the Epping, and the potatoes were very nice.
Posted by Sarah at 20:45