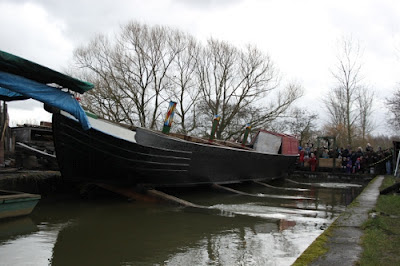 Or rather, side slipping...

Today was my first proper assignment in my new guise as HNBOC Press Officer and, by default, official photographer. The event was the launch of Walton - a wooden boat built in 1939 at FMC's Uxbridge yard, and subsequently purchased by the Mersey, Weaver and Ship Canal Carrying Company. Walton is now owned by Ade, who has been working on its restoration for many years. The latest, just completed phase, has been the replacement of the fore end bottoms.

The launch was to be by the traditional side slipping method, whereby the boat is released to slide down greased timber runners (what is their proper name?), er, sideways. This morning I was suddenly struck by the responsibility I'd taken on - supposing my photos of this seldom seen and dramatic event weren't any good? I ferretted out the instruction book for my new camera and checked up on shooting fast sequences of photos - up to 3.4 per second. Once sure I could remember how to set that up, we set off for Malkins bank, somewhere I'd never been before.

A warm, muddy welcome awaited us, and we were offered soup while a small band played. A small crowd of children got very muddy, whilst nearly every boat restorer you've ever heard of joined the throng. I was given privileged access to the far bank of the dock - which wasn't very wide - and found myself what I hoped was a suitable position. At one o'clock on the dock, Walton was released, and I reckon my camera earned its keep pretty well: 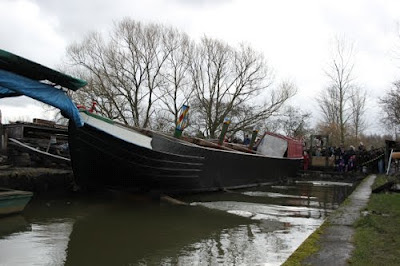 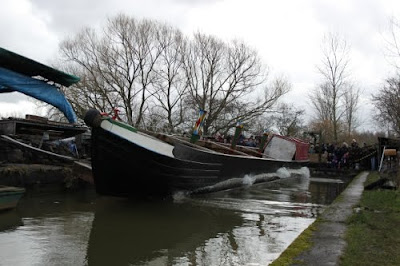 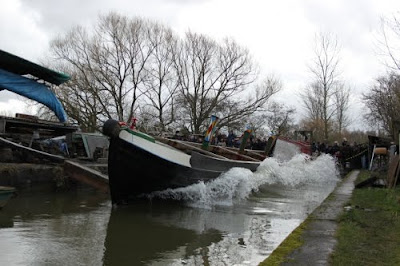 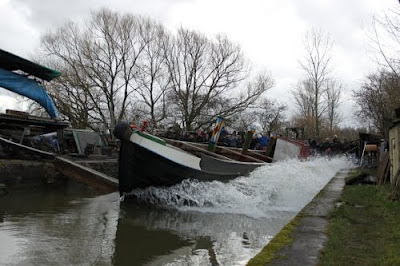 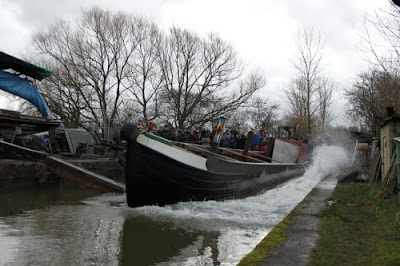 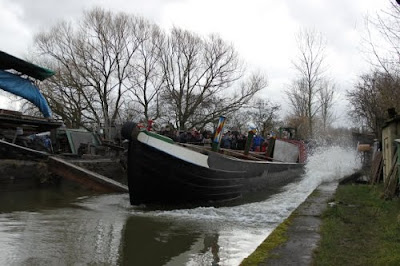 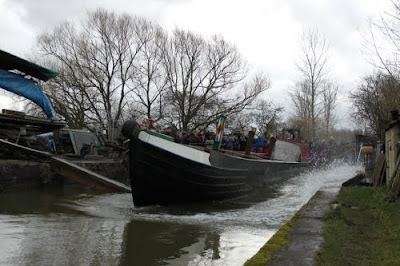 Well, I have picked the best one (wonder if you'll agree which that is), cropped it a bit and sent it off with a press release to the canal mags, and also to the gentleman from the Stoke Sentinel who was there with his lovely lady assistant trying to get various boat people to pose in increasingly foolish ways on Walton - so look out for that on Monday if you're in the Stoke area; and if you're not, hopefully there should be something in Canal Boat and/or Waterways World next month.
Posted by Sarah at 20:15