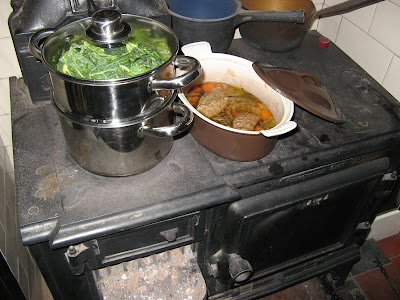 I'm taking advantage of having the house to myself to cook a bit of lamb for my dinner. This is de facto a vegetarian household, all of us at various stages having been ethically and ideologically committed to the veggie cause. I was veggie for fifteen-odd years and vegan for two of them (it was going to Huddersfield that put paid to that) and I still believe that really veganism is the only morally and environmentally sustainable position. But I'm not perfect enough to put what I believe into practice, at least not all the time, although I like to think that I do my bit. Anyway, what I realised is that if it's the environmental and animal welfare issues of factory farming that are your motivation, being a lacto-vegetarian (i.e. someone who avoids meat and fish but eats dairy products and eggs) is no better than occasionally eating a bit of meat - especially if it's small scale reared, free range and organic. There's a hell of a lot less animal suffereing and environmental devastation in that than in mass produced milk, eggs and cheese.

However, as I have lapsed, Baz has become much more hard line (having read Peter Singer), and Jim, while he also has occasional lapses (mainly around Nightingales steak pies in Atherstone and the odd steak in the Bridge at Brewood - see, it's all the fault of boating) he still tries to get himself back on the straight and narrow. Whereas I now feel no guilt about the occasional meaty treat, knowing that most of the time we all subsist on lentils and vast quantities of seasonal vegetables.

All of which is leading up to the fact that I decided to cook my entire meal tonight - lamb braised with vegetables and rosemary, mashed swede and steamed cabbage - on the solid fuel stove, in order to get in some practice for cooking on Chertsey. The stove in our kitchen is a 'Belle portable oven', about the same size as a Stratford range. That is bigger than the Epping I will be having in Chertsey but similar to what might have been fitted in a larger butty cabin. The principle is pretty much the same, although being open fronted it's a bit harder to control, not having a damper* to regulate air flow at the bottom of the fire.

I started off getting the stove nice and hot with plenty of coal and a good draft and put the pot on it to heat up. When I could smell that it was hot I put some oil in and browned the lamb. How satisfying to hear it sizzle without having turned on the gas! Then when that was browned I took it out and kept it warm on a plate on the stove top, and fried an onion, a stick of celery and a couple of carrots for a few minutes. Then I put the lamb back in on top of the veg, tucked in some sprigs of rosemary (the only herb I can grow so it's nice to have a use for some at last) and poured over some stock, then put the lid on.

I then moved it away from the hottest part and kept an eye on it, shifting it about to find the optimum spot for a gentle simmer, and moving the lever* that distributes the airflow either up the chimney or around the oven to its half way position. All that was an hour and a half ago, and it's looking and smelling lovely. Now I have to go and get things hot again to boil the swede and steam the cabbage. I'll report back later on how it worked and what the end product was like.

Postprandial update: Well, it did take a long time to get it hot enough to bring the water to the boil for the swede (lesson - start sooner) but it got there in the end, and the lamb didn't mind waiting and nor did my appetite. I can report that the end result was quite delicious, although there was perhaps a little too much cabbage.

*I think I've got the names right of the various bits but I know someone will correct me if not)
Posted by Sarah at 17:13