Another Chertsey, far away 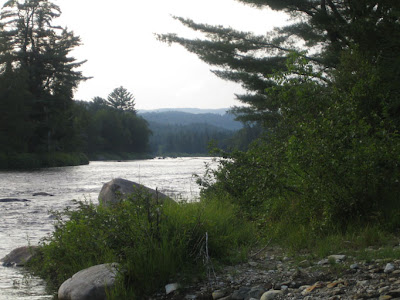 Remember the poor old ugly chair that no-one loved (well, Jim liked it because it was comfy, and once I finally ousted it from Warrior, Baz liked it in his room for a while even though it did take up a lot of space and he eventually gave it up too...)? Well, it has a new home at last, where it is loved and appreciated and sat on, back in a boat.

Back in the autumn, when Jim was taking Warrior back to Bill Fen, he was introduced to an acquaintance of Moomin's, a chap from Canada who works at Cambridge, lives on a boat, and had nothing to sit on. A match made in heaven for the chair, so Jim took it up there at the weekend.

He has got to know Alex (for that is his name) and it transpires that Alex has a cabin (bit like we have a boat I suppose), and his cabin is in a place, in Quebec, called Chertsey. Now isn't that a turn-up? Only because it's in Quebec, and 96% of the population are French speaking (according to Wikipedia anyway), it's pronounced Shertsey. Jim found somewhere (why can I never find the same websites he does?) that said it was named after the Chertsey in Surrey... slightly less strange I suppose than randomly arriving at the name... whose derivation I must look into one day, possibly the day I visit Chertsey Museum. 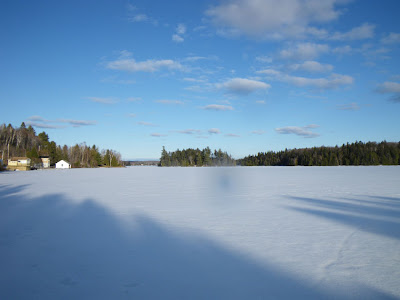 Anyway, Alex has sent some photos of his Chertsey, which looks a pretty wonderful - if cold - place. This is a lake....
Posted by Sarah at 19:46