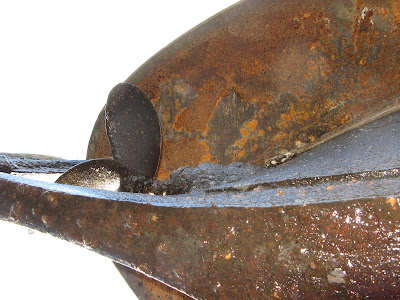 A little bit scabby and flakey, perhaps, but what do you expect at that age.
Seriously though, yesterday was the first opportunity any of us had had to get a look at Chertsey below the waterline. We've only had an initial look, and a further, thorough, inspection (with a hammer) is still to come, followed by shotblasting, and further inspection, and then we will have to have a survey in order to get insurance, so early days yet, but...
...I can say that there have been no nasty surprises yet. Some surprises -or semi surprises - but not nasty ones. Firstly, a long central section has been rebottomed in what looks like 12mm plate. Brutal but effective. Secondly, the back end looks to be untouched - no replating there that we can see at all. This is good insofar as it is apparently unusual for a boat to get to this age without repairs here, and insofar as it has lasted this long. On the other hand, a bit worrying, to me at least, that I might have to be the first person to do anything to it. But we shall see - if it's in as good condition as it looks, maybe not for a while yet. It was wonderful to be able to admire the curvy swim and marvel at the graceful shaping of the skeg, so unlike a modern boat's. 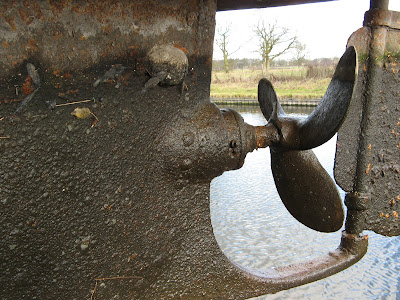 The refooting is pretty much as we thought from looking at the inside, and looks to be in good shape. There has been some replating of the fore end - nicely let in - and again that is still looking good. 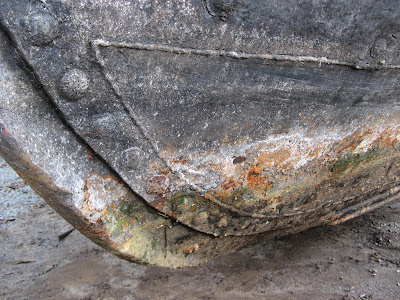 More pictures for rivet counters here.
Posted by Sarah at 16:13