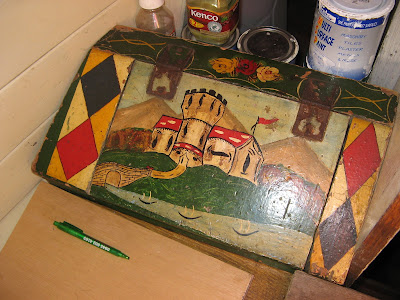 I took the opportunity on Wednesday to take a couple of (pretty dreadful, as they turned out) pictures of my monkey box.

Now, last summer, when we met Hawkesbury, newly bought, at Fradley Junction, and I got chatting with the steerer, when I told him I had just acquired Chertsey the first thing he said was 'You've got my monkey box!'. Indeed, when I first went and saw the boat, it was described as 'Hawkesbury's monkey box.' But it ain't. As far as I can gather, something like this, like water cans, would be the property of the boatman, not part of the boat, and this one certainly is, having heard its history and how it came to be in Chertsey. It was made by Roger Hatchard, when he did indeed have Hawkesbury, but when he swapped his G.U. for a josher it didn't fit, so he gave it to Richard Barnett for Chertsey, and it's come to me along with all the other odds and ends on board. It's nice for me to have something with a connection to Hawkesbury, as my surname is the same as the name of its original (official) butty.

To be honest it doesn't fit perfectly on Chertsey, it's crudely made [but see comments for clarification] and painted, but as a bit of history and a nifty hidey-hole, I love it. To be honest some more, until I saw this one I hadn't even heard of a monkey box, so I asked on CWF about their origins and uses, and a long and learned thread ensued. The general consensus seems to be that they were used for storing cleaning materials and rags, possibly because there was a particular brass polish called 'Monkey Brand'. 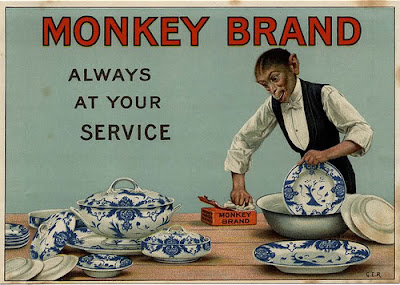 Looking at it through female eyes though I find this rather unconvincing. The monkey box (open at the bottom and at the back, though this might not be typical) sits on the side bed, tucked into the corner adjacent to the door. 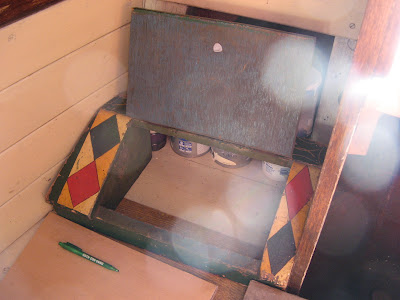 It's a safe and relatively clean place; why waste that on storing cleaning materials which could just as easily be kept in the boot cupboard, under the side bad or even in the engine room? Furthermore, brass polish tends to come in bottles - and I think always has had - which would be too tall to store upright in the monkey box. One person suggested that an alternative name was 'pillow box', which severs the Monkey Brand brass polish connection, and - although I'm very prepared to be proven wrong if there's any evidence to be produced either way - I'd be far more inclined to think of it as a relatively safe, covered, clean place for storing treasured possessions. I admit that that is purely intuition, and I would love it if someone could come up with something conclusive to demonstrate their use - and indeed, how widespread they were.

In the meantime, I'm afraid I shall be keeping my little treasures in mine.
Posted by Sarah at 17:50