More about the slides

Now this is something that's definitely not original. Someone - perhaps Richard Barnett* himself - has put a great deal of effort into making these, and based on progress made with the engine hole slide so far, it looks as if we'll be able to repair and reinstate them.

In short, the slides are made from 1" marine ply, covered with (2mm?) galvanised sheet, and then finished all the way round with aluminium D-section. The sheet has been bent round all the sides, and snipped to accomodate the curve. 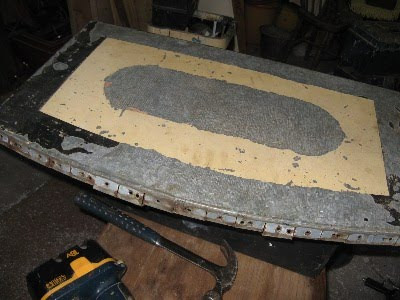 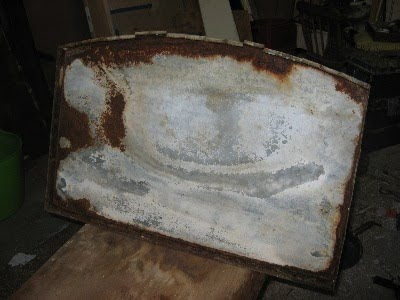 It's in remarkably good condition, considering it's been on there for thirty years or more. Jim has dismantled it, and reckons the tin can be used again. The hardwood runners also seem fine, and the ally edging can be reinstated too. The only bit that really needs replacing is the ply base. 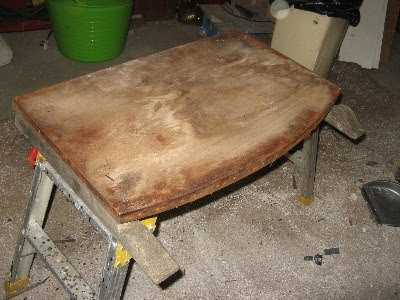 It hasn't helped that the edging was screwed into the side of the ply, using ferrous screws - but it was past saving anyway. We did think about replacing it with wood, but thought it would be harder to get that in the right thickness. Marine ply is pretty expensive, but Jim is hoping to get some suitable offcuts from a (sea) boatbuilder friend.

Interesting too, to see how the different types/colours of paint have adhered differently - the cream is nearly all still there; the black is almost all gone, and whatever was in the middle (red?) we shall probably never know, as not a trace remains.

* I never know how else to refer to him, this distant (and deceased) person with whom I have a rather strange relationship. 'Richard' seems overly familiar for someone I never met, and who by some accounts could be rather prickly; 'Barnett' sounds a bit too dismissive and rude, and anything else is just silly. So in true Quaker fashion, I guess I will just have to continue to give him his full name.
Posted by Sarah at 13:54