Heat and dust and heiroglyphs

Well, summer has finally arrived with a vengeance and I'm certainly not complaining, although it does make for less than ideal painting conditions, especially down in the engine hole. I put that off until the cooler evening yesterday, but it seems it's not just the dust but also now paint fumes that aggravate my cough and from having felt a bit better earlier I spent another uncomfortable night. Now it's bright sunshine outside and - and this is unheard of - I'm sitting in the cabin with all the hatches practically shut, and it's dim and relatively cool. 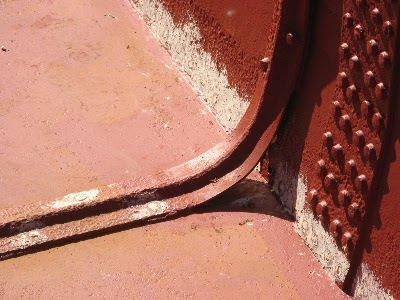 Jim spent most of yesterday back in the hold. Now it's thoroughly dry, he filled in all the rivet holes left when the boat was previously rebottomed. This is to stop water collecting in them, and in the case of the chine ones, to stop it seeping through into the inside of the chine angle, where it would do no good at all.

Then while putting another coat on the sides, he spotted this: 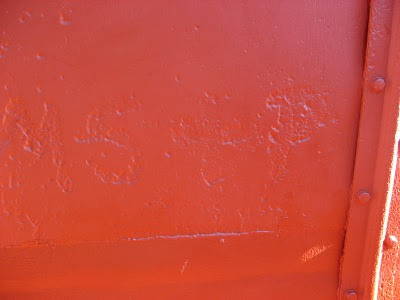 Surely too clear to be coincidence, it looks to me as if something has been roughly painted onto the steel here, and as a result of having more/less/different paint, it has corroded differently leaving a ghostly shadow of what was written - which looks like M S + P. Any ideas as to what, when, why, how?
Posted by Sarah at 08:36