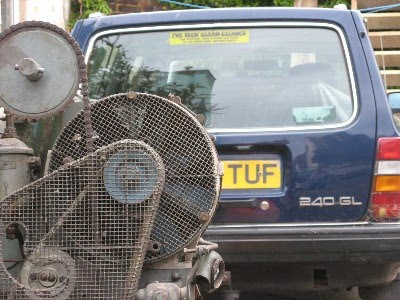 Tufty's escape route is barred by a PD2...
A little background... When I bought Chertsey, the engine was completely seized, after decades of not running. We tried various tricks like pouring hot oil down the cylinders etc, but to no avail, so reluctantly decided to replace it with a newly rebuilt one (especially as PD2s come at bargain basement prices compared to Nationals). Then we had the saga of getting the old engine home, which included it having a bit of a fall... and now we are in the throes of planning how we will pick up the 'new' one.

This is complicated by the fact that following last week's alternator wire issue, Fang has broken down again. (Fang is the 1988 240 estate. There is also Bluebird, my 1988 240 saloon, and the latest arrival, Tufty, a 1986 240 estate. You need to know this). So we have left Fang (with petrol pump trouble this time, Jim reckons) at Stretton until the local independent Volvo garage man comes back off his holiday. The plan was to go back next time with Bluebird. But Bluebird doesn't have a towbar. Tufty, however, does, and despite having initially been bought for spares (especially its pair of brand new headlights) has done fewer miles than either of the others, and is a 2.3 litre manual (against Bluebird's 2.0 auto). So we thought maybe it would be an idea to see whether it was worth trying to put Tufty on the road. The one hitch with this is that currently between Tufty and the end of the drive there sits... the engine.

Having already thoroughly established the impossibility of moving the engine in one piece, we today reached the decision that we (read Jim) would have to start dismantling it, at least enough to reduce its weight sufficiently that it could be shifted a few feet. So off came the starter motor, then the flywheel cover. Then Jim went to undo one of the nuts on the flywheel - and the whole thing turned round. After all that, the engine was turning over!

No doubt it was its somewhat violent treatment that finally unseized it. At first I could have wept, but thinking about it, it would have to have come out anyway, even if only the top end had needed rebuilding, because you can't get the pistons out without accessing it from underneath. And who knows what horrors we might have discovered and how long it might have taken to fix them. But think also of the logistical grief we might have saved, maybe even money... and Chertsey would have kept its 1960 engine. But it is of course no good crying over spilt milk, and I am confident that the 'new' engine will be better than the old one could have been made given the time and resources available, though I do reserve the right to stomp about muttering 'bugger' for a little while longer.
Posted by Sarah at 17:58