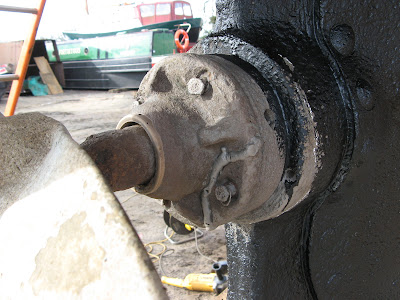 Sadly though you can't just walk in and buy them off the shelf. But never fear, Compo is on the case, or if he isn't he soon will be.

As for the rest of the stern gear, it's all got to come apart and then we shall see. I took the greaser cap off to show Jim how it worked, and then wished I hadn't as it was well nigh impossible to get it back on. Plenty of grease in it though.

There have been mutterings about the prop... mutterings, accompanied by the sucking of teeth, along the lines of 'it looks a bit small'. We suspected it might have been the prop that went with the original National engine, which might theoretically be on the small side for the PD2 with its 2:1 (as we then thought) reduction. But then I posted about it on Canalworld and knowledgeable voices on there have said that it in fact has a 3:1 reduction, a three-wheel version that doesn't feature in the owner's manual, specified to enable BW to use the PD2 as a direct swap for the National without having to change the handedness of the prop. This is one of those situations where you start to realise how much you didn't know (even if you thought you did) and become rather hesitant to state anything categorically as I'm sure there is still a great deal more to come out about this. But I'm thinking... 3:1, with a maximum engine speed of 1500 rpm, seems a bit... well, I dunno... what do you think?
Posted by Sarah at 17:10